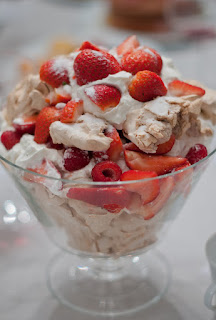 Boys' schools have been on my mind of late. My son is 5 and we had just gone through the brutal process of applying him to "big boys' school". The jury is still out for us, it may not be resolved for months if not a year or two and as a concerned mother, it preoccupies me for the most part.
This experience, traumatic as it is, led me to make Eton Mess for our Easter dinner. Perhaps a subconscious action in response to the personal debacle I've created for myself. Having known for a long time that New York has literally a handful of all-boys' private schools - and the fact that most of them stop at the eighth grade with the tradition of moving on to boarding school - I have to be open-minded about the possibility that one day, my little precious boy might have to leave home sooner. What better place than to England - land of Harry Potter, Enid Blyton - and what even better place than Eton - alma mater of those dashing princes, Prime Ministers, lords and dukes....so I've often joked. Hence, Eton Mess.
At the same time, this circumstance brought back memories of the boys I grew up with. In Singapore, the boys I knew could be generalized into ACS (Anglo-Chinese School) boys or RI (Raffles Institution) boys. Yes, I also knew several from schools such as St. Patrick's and St. Andrew's though ironically, I did not know any from Gan Eng Seng (the eponymous school donated by my paternal great-great grandfather.)
It was often bantered about that "ACS boys owned Singapore and that RI boys ruled Singapore." I dated boys from both schools and studied with RI boys. To a large degree, they lived up to their stereotypes. I had lots of fun hanging out with my ACS friends. They were generous and charming. And I respected the academic brilliance that many of my RI schoolmates displayed. They were driven and cerebral. Perhaps, my experiences interacting with all these 'guys' influenced my direction as I searched for the right school for my son, here in New York.
Yes, there are the ACS and RI 'counterparts' here in New York. And for that matter, the SJI (St. Joseph's Institution) one too. I can only hope for my son to be everything he's meant to become. The Best is Yet to Be. Auspicum Melioris Aevi.
And as for Eton Mess? I experimented with Jamie Oliver's recipe (from what I think is his best cookbook "Cook with Jamie") and infused accents from Kueh Lapis Spekkoek (page 114 of my cookbook). After all, my little Baba boy might be heading to that institution someday. I hope that you like it.
Basic Meringue Recipe
6 large egg whites
1 cup plus 5 tablespoons superfine sugar
A pinch of salt
2 tablespoons bumbu kueh (spice powder used for Lapis Spekkoek, you can check my cookbook for recipe. Alternatively, a bottle can be found in the baking section in an Asian supermarket.)
Preheat oven to 300 degrees F. Line baking sheet with parchment paper. Put the egg whites in a mixing bowl, making sure that there is absolutely no trace of egg yolk. Whisk on medium speed until the egg whites form stiff peaks. Add the sugar, a little at a time, as well as the salt. Increase the speed and whisk for 7 to 8 more minutes until the meringue mixture is glossy white and stiff. Rub a little of the mixture between your thumb and finger to ensure that the mixture is smooth, not grainy. Avoid whisking for too long, otherwise the meringue peaks will collapse. Fold in the bumbu kueh. Then spread the mixture in one big blob or several smaller ones, on the baking sheet. Bake for an hour until the meringues are crisp on the outside and slightly chewy inside. The meringue will look off-white or pale brown because of the bumbu kueh. Remove to cool.
Assembling
2 cups heavy cream
2 teaspoons vanilla essence
2 tablespoons superfine sugar
9 ounces strawberries, hulled and sliced into quarters
9 ounces raspberries
1 tablespoon brandy
Whisk heavy cream and vanilla essence and 1 tablespoon of the superfine sugar until you get soft peaks. Keep chilled in the refrigerator.
Combine half of the strawberries and raspberries with the remaining sugar and the brandy. Leave to chill and macerate in the refrigerator.
When ready to serve, best to use a trifle bowl. Layer the meringue (break the big blob into smaller ones), alternating with the whipped cream and the macerated fruit. Top with the remaining fresh strawberries and raspberries.
at April 18, 2012