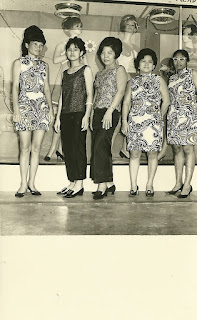 Last week, I was invited to a trunk show at a swanky hotel on the Upper East Side.  One would have thought that I was shopping for myself.  Actually, I was previewing the Fall/Winter selection for children, under the new label of one of America's most famous designers...he who dresses First Ladies.  Carried away, I melted my credit card on a flouncy birthday dress for my daughter and a few more outfits for both daughter and son.  Then, these past few days, I have been looking high and low for kids' pajamas for a theme party.

When friends have babies, my husband's preference is to present them with clothes. The point being that children outgrow their clothes quickly.  Then again, my sister always cautions me not to overspend on children's clothes for that very reason.

For every season for the past eight years, I have shopped more for my children than anyone else.
Yet, each time I buy their clothes, particularly my daughter's party frocks, I hark back to my childhood.  My mother used to bring me along to "Great Wall".  It was a tiny shop situated at the back end of a storefront building across from Centrepoint on Orchard Road.  The air-con would rattle and drip above the main entrance.  It was always chilly in that room.  If only I could have snapped a photo of their display.  Two rows of party dresses in different sizes and pastel shades, with petticoats, smocking, tucks, darts, or frills; in organza, taffeta, cotton; adorned with sashes, lace or ribbons.  Those dresses were all hand-made on premise by a husband and wife team.  That indeed seems like an ancient memory as I have no idea what has happened to the shop or the couple for that matter.  The building was razed to make way for yet another shopping mall.

My mother tried to make a few similar dresses for me.  When I was placed temporarily in a primary school, waiting to be admitted to another, my mother had me show up for class in these dresses. I might as well have gone for a birthday party and not to class. She sewed during the evenings as much as she cooked and baked during the day.  She took classes and even graduated from one such course by designing, sewing and wearing her final project - a cheongsam. When she passed on, we were left with drawers full of thread, cloth and paper cutouts.  We could never bring ourselves to throw them out, knowing how much they meant to our mother.

In a few weeks' time, my family in Singapore will move from our old apartment to a new one.  Now the question remains about what to do with the sewing machine.  It just won't sit upright in its own wooden cabinet - so how then would you sew with the broken machine?  Just the thought of abandoning the sewing machine seems sacrilegious to the memory of a mother who used it to make our pajamas and school uniforms in addition to those home-made frou frou frocks.

Email ThisBlogThis!Share to TwitterShare to FacebookShare to Pinterest
Labels: parenting