A Salute to American Steak 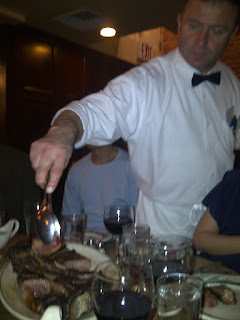 On Good Friday, my husband and I sheepishly (excuse the pun) went to Peter Luger Steakhouse. On a day when many of our friends gave up meat, we obliged another pal to visit the temple for carnivores on his birthday. It was a good day to get a reservation - being the double whammy of a Christian day of observance and the Jewish Passover. This was not the first Good Friday where we had felt a tinge of guilt, even if we are not Catholic. One year, we fancied the nearby Avra Estiatoro, a restaurant that specializes in fresh fish prepared Mediterranean-style. It was unusually crowded. Thus we crossed the street to Smith and Wollensky to join the other meat harlots reveling in the den....our excuse being that we had to get home in time to relieve the nanny.
American steak is in a category of its own. I am not being biased. Even Jacques Pepin, a French-trained chef, proclaims the superiority of American beef above all others. For me, I specifically refer to the corn-fed, fat-marbled slabs that are dry-aged to perfection. I had tried grass-fed after having read "The Omnivore's Dilemma" but decided that if I was to be bad about consuming meat in the first place, I might as well be real bad. We went back to corn-fed, we had acquired that taste for it and were spoilt.
The trick is to buy the best quality beef possible. It then takes very little seasoning to produce a heavenly meal. Thankfully, our butcher Simchick scores a 29 on Zagat and happens to be at the end of our street. While he is still pricey, he is nowhere near the range of Lobel's. I had once gone in to get 2 NY strips from Lobel's. Upon being told that it was $98, sticker-shocked, I instantly called my husband and said "Whatever you do, make sure you come home at 7 tonight with a very good bottle of wine!"
Peter Luger stands as one of the landmark restaurants in the city. As a young associate in banking or advertising, a client dinner at Peter Luger was an upward stop on the career track. A visit back to the steakhouse this past Friday was a trip down memory lane for the nine of us whose recollection of the young, ambitious days included jaunts to Peter Luger and Nobu in the 90s. Alas, the place was not like the one we remembered it to be. The waiters were not gruff anymore, the crowd was too touristy, there were none of the "shady" Italian contractors and their molls by the bar counter. Like much of New York, the place has been sanitized. Besides, past the days of loyalty and brotherhood, many Peter Luger alum have gone on to open their own steakhouses to rival the godfather, almost all of them in Manhattan. Convenient for us urbanites who don't drive across the Williamsburg Bridge.
We were a raucous bunch nonetheless. Then we trooped off to karaoke, belting out 80s music. The night brought back memories of our 'breakfast club' of sorts, only for us, it was our supper.
Simple recipe for porterhouse:
2 slabs of high-quality porterhouse, 1.5" thick
Season with salt and pepper.
Sear for 2-3 minutes per side. Finish off in a broiler (460 degrees F) for 10 minutes of medium or 15-20 minutes for well done. Optional - turn over the slab midway.
Serve in its own juice or with a small dollop of horseradish.
at April 08, 2012

Eaten at Peter Luger's once. I still think the steak at the Wee-Fu Nonya Kitchen is way way better.