Our friend Lou is a mix of Kramer from 'Seinfeld' and your neighborhood pal who drops by informally....just the way it used to be when we were growing up.  Every so often, we would get a call on a lazy Saturday afternoon.  The doorman would announce that Lou happened to walk by on his way home, and that he and his son - my son's best friend - would like to come up.  Back in November 2010, Lou did just that.  Except that he came with the Wall Street Journal Weekend Edition tucked under his arm.  It featured a recipe for Beef Wellington and he wanted to follow up on his question a few months earlier about whether I knew how to do it.  I made a promise that one day I would prepare a meal for him featuring Beef Wellington.  The truth was, I could only vaguely remember experimenting with it once before without much deep thought into the science of perfecting it.  My clearest recollection was being served this grand meal on December 31, 1989 when this guy, Francis, a budding gourmet cook, fussed over his Beef Wellington for his buddies and their girlfriends.

Considering that it took me ten years to launch my cookbook, this promised meal for Lou followed a pretty similar pace.  Then again, our two little boys will no longer be together come September and I felt that this meal had better take place before we all inevitably drift in different directions.

This past Saturday, we gathered a few of our closest preschool family friends to celebrate the past and the future.....and to fulfill the Beef Wellington promise.  The menu included:


A sit down meal starting with
Chilled Watercress and Potato Soup, then
Fennel, Avocado and Grapefruit Salad with Icelandic Salmon Gravlax with Citrus dressing
followed by
Beef Wellington
served with blanched Asparagus in season, and Potato Gratin

I told my guests that I could not be held liable if someone did not wake up the next morning, after a heart attack from all the heavy cream, foie gras and red meat.  For such an epic moment,  I had to bring out my silver flatware and pour good red wine into Baccarat. 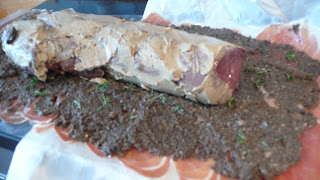 I referred to Lou's Wall Street Journal Beef Wellington recipe. I turned up the decadence notch by replacing the truffle butter with foie gras.....bottle of it bought at the Charles de Gaulle airport on my last trip to Paris.  For the most part, I followed the rest of the instructions, including the duxelles and the ready-made puff pastry.  It was a heavenly meal and guess what, the slices of perfect medium rare beef filet with an elegant coating of foie gras, duxelles and prosciutto, enveloped in golden pastry even looked like what had appeared in the article.


It was a night to remember.  For the friendships and that much awaited Filet de Boeuf en Croute. 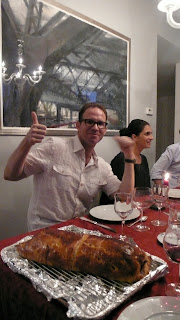