Before Din Tai Fung began to spring up everywhere, my Chinese-American friends would subway to Flushing for some of mother's Taiwanese food.  The progeny of Taiwanese immigrants - my husband included - they liked Nan Bei He located on 40th Street.  That was in the late 1990s.  I would sit there and gawk as Gloria enjoyed her bowl of salty soybean curd with deep fried cruller (you tiao).

Flushing, to me, is a Taiwanese-influenced Chinatown as opposed to Manhattan's Chinatown which remains a Cantonese stronghold.  I assume this based on who resides where and what dialect they tend to speak.  The Taiwanese nannies I know live near Flushing whereas the friends I know with links to Canal Street, still break into Cantonese in the midst of their dialogue. 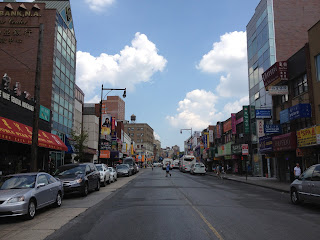 As part of my weeklong "Sharon summer camp" for my kids, we made a pit stop at Flushing today before visiting the New York Hall of Science which is three stops away on the 7 line.  After walking two loops around the block in the withering heat,  I was told that Nan Bei He had moved to the other side of Main Street.  It is now situated in a new complex along Prince Street.  I explained to my kids that this was the cuisine of their paternal grandparents.  The cold soy milk was a welcome relief, swiftly followed by scallion pancake rolled with beef (niu rou bao bing) and beef stew noodle soup.  The beef stew was so tender, my daughter was thrilled that she did not have to tear or chew the pieces apart.  The scallion pancake reminded me of Mrs. Yang, my friend's late nanny, who made this for us from time to time as a thoughtful gesture.

A larger group sat next to our table.  Their lunch order featured so many familiar dishes that had it not been for my kids, I would have plopped down with them to partake of their fare. Chicken Taiwan style (san bei ji), braised beef (hong sao niu rou), vegetable stir fried with sha cha sauce and of course, xiao long bao. 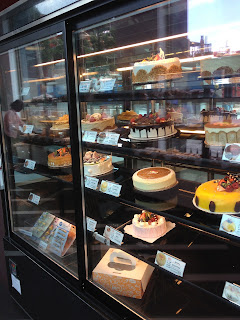 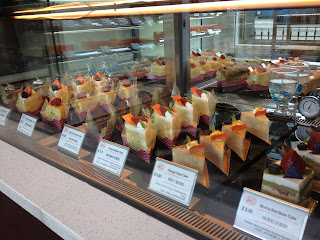 Later, we walked past a cake shop and peeked in.  Iris Bakery, at the corner of Main and Prince, in the same complex as Nan Bei He, assures me that yes, finally, those hipper Asian food retail shops are coming to America and will provide a much needed facelift to the old-style shops that make Chinatowns here a cultural time warp.  The cakes were innovative, glossy concoctions and were elegantly presented.  We were too full to try any of them but they were pretty enough to suggest that perhaps I should ride out to Flushing to get these cakes for my next dinner party.


A reliable cookbook for such Taiwanese fare is "Blue Eye Dragon: Taiwanese Cooking" by Jade and Muriel Chen.  Enjoy!

Email ThisBlogThis!Share to TwitterShare to FacebookShare to Pinterest
Labels: Restaurants