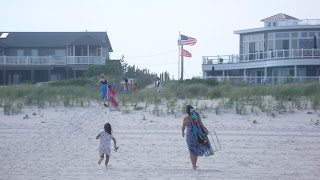 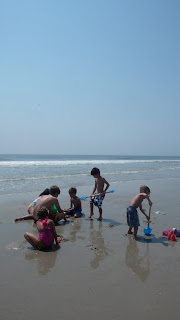 We were recently invited to spend the weekend at a friend's beach house.  There were seven children.  They spent the day at the beach digging and constructing water tunnels, (cess)pools, moats and castles. Then we all ran into the sea to jump over and ride on the white water waves rushing in.  We collected beautiful black scallop shells, mussels and soft shell crab.  Winding down in the evening, we tucked into grilled steak, hot 'dawgs' and burgers.  The children went on to play hide and seek.
This made for the kind of idyllic moment that children deserve to remember of their childhood.

I recall that day so clearly because I was one of several freshly-bathed children seated at a long table, waiting for dinner to be served.  One of the mothers came over and said that we should toast to the half-year mark.  A precocious 7 year old boy then corrected her by saying that she was a month too early, it should be June 30.  (He went on to MIT.)

Singapore does not have a three-month school break.  But it does punctuate the school year with a monthlong siesta in June.  In 1981, my eldest sister took me along on her weekend jaunts with her friends.  She had not had children then, so I became the token child who mingled with the minors in the entourage.  Late Friday, we would hop into one of several cars in a convoy heading northwards towards Kuala Lumpur.  We would stay the night at the KL hotel which one of the friends owned.  The following morning, the cars would then travel the winding road that led up to the top of Fraser's Hill.  I only made it to the Hill twice but the experiences were so carefree that I remember them for life.

We stayed at the Sime Darby chalet, situated at the end of the main road.  It was a double-storey bungalow with several bedrooms, a tennis court and a huge compound.  Best of all, it came with a resident Hainanese chef who whipped up a gourmet meal each time.  He brought out the best of what the Hainanese are renowned for.......marinated pork chops, sweet and sour fish being what I recall best.  We would pretend to toast like the adults seated at the long banquet table parallel to ours.  The adults found us amusing until one of the boys unknowingly poured the white wine into the ice bucket, thinking that it would chill even faster.

The same 'half-year mark' mother, Teresa, was a beautiful lady who donned nylon stockings when she wore her sexy sports shorts.  She was the ultimate den mother who co-ordinated rounders matches and charades.  With her loud, booming voice, she was able to whip us children into obedient teams.

Our travel entourage made other trips that same year - to the Golden Sands Hotel in Penang, a durian plantation in Johor and to a Malaysia Cup match in KL (where we had to be hustled out quickly in case a riot broke out between Singaporeans and Malaysians).

These days, the dozen or so children are spread out.  But we keep abreast of what's going on among ourselves from time to time.  I once flew up to New York with one of them.   We have our own families.  I bet, like me, we will be hard pressed to remember what Chinese characters we had learnt in June 1981, but will recall with fondness, hiking and horse-back riding in the cool climate in Fraser's Hill, and bumping up and down in the back of a car riding the highway past palm and rubber trees.
at July 02, 2012