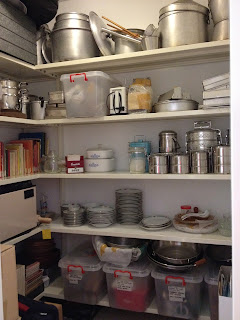 The UN General Assembly is going on now and my residential area is a glorified war zone for diplomats, despots and presidents to revel in self-importance.  Back in 2001 right after my mother's passing, I had cobbled all her recipes together and hand carried them back to New York. Because I lived a literal stone's throw away from the UN Assembly Hall, I was often nervous that we would yet again be the target of another terrorist attack in the wake of 9/11.  Alas, we did not have a bomb shelter.

Back in Singapore, however, our new apartment has been outfitted with a bomb shelter.  The blueprint drawings for the property had been approved during a time frame when the government had implemented the compulsory construction of 'bomb shelters' in residences as part of their Civil Defence Plan.  Then they changed their mind.....probably recognizing that the shelter was being used more as a suffocating, claustrophobic square foot maid's room with no windows.  Imagine the international uproar   should this be noticed by human rights activists.

I offered up my bomb shelter space as an overflow room for my mother's 'barang barang' - all the kitchen paraphernalia that she acquired over the decades and left behind intact, right down to the packaging that almost all of these blenders came in.

As I spent many weeks (of what was supposed to be a relaxing vacation) unpacking box loads of kitchen items, I kept thinking about our kitchen in Yarrow Gardens.  In the cookbook, I had written:

The middle kitchen had several wooden plank shelves and drawers to contain her baking trays,
Nonya cake moulds, tiffin carriers; and other items which needed more protection from outdoor dust.
She also hung her large rattan trays here, some of which were about three feet in diameter.
These circular trays were meant to sun-dry foodstuff, among them spices prior to grinding them
into curry powder.

A few shelves were set aside for my mother’s appliances.  She bought several in her lifetime,
always on a quest to find the best blender and mixer.  They were neatly protected in plastic sheets
and it was often a tedious chore to take the heavy machines out just to use them!
The third kitchen was outdoors but cemented and zinc-roofed to protect from the sun and rain.
Because this open kitchen could be seen from the road, it was a perennial eyesore for my neighbors
even though my mother tried to camouflage her pots and pans with rattan chick blinds.
My mother installed another huge rack to store army-sized pots and pans and other large and
heavy items such as the batu lesong, batu boh and batu giling.

Apparently, my sister Molly, in a fit of panic at how much she had to relocate from the old place,
threw out a lot of items.  Rummaging through my mother's belongings felt like an archaeological trip
as I unearthed tools and tricks for making pineapple tarts; special pots and measuring cups and cookie
cutters, what not have you.  With a lot of sentiment, I organized them according to recipes and labeled
the boxes with magic marker and musking tape...uniform plastic boxes I had purchased from Shop N' Save.

Then I lined all her cookbooks along the heavy duty metal shelves that my sister Beng had specially
customized. The books included her favorite Tham Yui Kai recipes and circa 1960s Home Economics
textbooks, plus many first editions of her friends' publications, in particular those of Mrs. Leong and
Mrs. Lee.

The tingkats reminded me of all the wonderful parties we had, the leftovers lovingly packed for my sisters
to take home.

Proud of the completion of my nightly homework, I showed off the shelter to my friends.  One asked me,
"So where are the requisite radio, bottles of water and torchlight?"  With a shelter like mine, my
mother's tokens of comfort were all I needed.

All good things have to come to an end.  The summer has been long and throughly productive....which included two solid weeks of exploring New York City, a trip back to Singapore to visit family and a vacation to India. While in Singapore, I failed miserably in conducting my "academic maintenance plan" for my kids.  Distracted by a retinue of movers, contractors and electricians, my kids slipped easily into a regime of swimming, television and car rides with their aunts.  Haunted by guilt, I made a desperate attempt at squeezing in a few events to break the monotony.  What good fun we had.

1. Singapore Night Festival
We finally managed to sneak away from the aunts (my sisters) for the last night of the festival.  We waited for 45 minutes under the mylar tent, enduring the bad imitation music (in my opinion) of The Great Spy Experiment.  Every riff was a U2 sound-a-like.  The patience and sweat (literally) paid off as we witnessed the performance 'Mylar' by Fuerza Bruta, a troupe from Argentina.  4 women slipping and sliding across the thick plastic platform in a shallow pool of water made for 'wet and wild' and underwear galore.  My kids are innocent enough but I am pretty sure the adult audience enjoyed the voyeuristic sensation, watching from below.

Bras Basah came alive and twinkling as projected images lit up the facades of our beloved buildings, the old SJI and the National Museum.  There was celebratory carnival noise in the air as Fuerza Bruta performed along Armenian Street as well - a crane that held up a woman who swung around and swerved in a flowing gown, resembling the lady from the Mooncake tale.  All this happening while a group of chanters and bangers whistled and drummed around the crane. We were mesmerized.

2. Gardens by the Bay
We beat Will and Kate to it!  Unfortunately, when we went one Saturday morning, we missed becoming the One Millionth visitor by a thin margin (the winner emerged that evening) and lost out on a bunch of prizes.  The two air-conditioned domes are well worth visiting.  I liked the Flower Dome for its colorful rendition of seasonal flowers - begonias abound at this time.  The olive trees reminded me of my wonderful time in the Garden of Gethsamane.  As for the other dome,  apart from the spectacularly high waterfall as you enter, the landscape was more concrete and less floral.  We went up to the 6th floor to the 'Lost World'.  The fact that I cannot remember the actual name of the dome off-hand highlights why I was not exactly enthralled with it.  It unveiled my fear of heights.  Considering that I live on the 25th floor of a high-rise, it is a different feel altogether when you are walking along an intentionally shaky ramp that spirals around a fake mountain.  The ramp is supported by metal rod beams and bumps along with every thump and jump of its pedestrians.  Yikes, I kept thinking I might fall over down to the hard concrete ground!  I froze a few times but was motivated to snap photos of my family before scuttling back down.  That perhaps was the thrill ride that the dome wishes to provide visitors.

And by the way, it might take another 5 years before the outdoor trees are lush and can therefore provide leafy canopied respite from the heat!

3. Marina Bay Sands Light Show
I used to think that the brilliantly lit Hong Kong skyline was the best in the world.  The Singapore skyline, taking shape quite nicely, will give HK a run for that title.  Sitting with my kids and sister in the open air right outside the MBS mall, I pondered at how much the scenery has changed.  The OCBC building has been eclipsed by taller towers.  The Fullerton Hotel forms a tiara along the 'bund' .
The light show is free entertainment and copies the famous Bellagio fountain show but with a twist.  In typical Singapore fashion, it 'teaches' the audience about the value of water and the importance it is to life.  There is a montage of diverse Singaporean faces visually sprayed onto a water vapour screen (trust my attempt at describing a movie screen made of water).

4. The Arabian Nights (La Salle College of the Arts) until September 18
Performed by iTheatre with original score and lyrics and a creative storyline, my children giggled and listened throughout the 2 hour musical.  They came home repeating lyrics of the opening song. I came home with a refresher about the Arabian Nights and could finally put together the plot involving Princess Sherazade.  The costumes were beautiful, the King looked like he had borrowed the slicked back hair and high collared tunic look from the actual King of Bhutan.
My favorite was the sub plot "Merchant of Sinda' - I thought Faizal Abdullah who played the role of Hamid was most entertaining.

5. The Cat in the Hat (The Little Company)  until September 30
The Little Company's regular repertoire at its cozy resident theater along Robertson Walk is always short and sweet.  This play was 40 minutes and was first performed by the National Theatre of Great Britain.  It was brilliant and captivating - from the costumes and set which popped out of Dr. Seuss' storybook, to the acting (Thing 1 and Thing 2, played by local actresses excelled with their expressive gestures).
We bought a few Dr. Seuss books on sale on our way out.


The performances by our local companies get better and better each time we attend one.  Plus, there are several to choose from at any one time, particularly around the school holidays.  This is a privilege for the new generation, a far cry from my childhood where the first play I had been to was 'Winnie the Pooh' at the old Drama Center along Fort Canning.