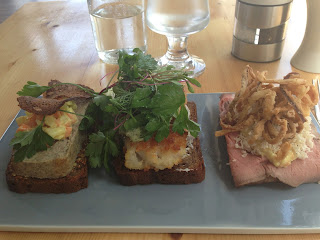 It's been one of the most action-packed summers for my family.  We literally took planes, trains and automobiles (and sailboats) to travel far and wide.  Fun and insightful, I will begin a series of our adventures these past weeks.

Yesterday, I indulged in my annual "one-day-away" time to myself.  Last year, I had spent a good part of a hot and humid afternoon biking around Manhattan.  This year, I decided to try the new Citibike rental program while incorporating a day of all things Danish.  Perhaps I wanted to relive the good time we had in Copenhagen recently.  I went for lunch at Aamanns in Tribeca; followed by a compelling Danish movie "The Hunt" starring the magnificent Mads Mikkelsen.

Aamanns serves smorrebrod - lavish rye bread open sandwiches elegantly displaying main features such as roast beef, roast pork loin, fried fishcake or pork pate;  garnished with parsley, cubed pickles or dill;  spread with remoulade or tartar sauce for example.  Various combinations.  There are a few famous smorrebrod restaurants in Copenhagen.  These include Ida Davidsen (mentioned in "1000 Places to See Before You Die') and Schonnemann, both within walking distance of the fabulous Rosenborg Castle.  We did not try these two but were wowed by what we ate at 'Told and Snaps' close to Nyhavn ('Told and Snaps' in the Danish language is apparently something about protesting about paying high taxes....how close to my husband's heart.)  What caught us unawares was the fact that these smorrebrod restaurants are not the ubiquitous sandwich delis we are accustomed to in New York.  These delectable open sandwiches are serious meals unto themselves and diners make reservations to get into these establishments. 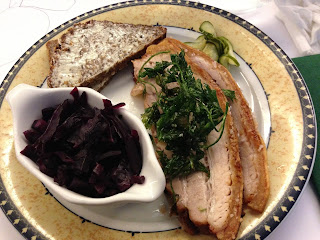 Weeks later, while we were staying in an old Austrian castle, our hostess served us sandwiches for dinner.  It was light and surprisingly refreshing for a summer evening.  We concocted our own combinations with sliced cucumber, tomatoes, bologna, prosciutto, butter, with an offering of various types of bread - kaiser rolls, rye, white.  Having sandwiches for dinner was indeed a revelation for me. Growing up in an Asian family, it would have had to be white rice, white rice, white rice......

My best memories of sandwiches are of those which my mother packed for my annual primary school excursions.  White bread, Plumrose ham, sliced cucumber, Buttercup butter. These sandwiches became 'softer' as I carried them in a Tupperware container through the sweltering heat before we settled down for our picnic.  I also thought about my first time ordering a sandwich at a NY deli.  I asked for "ham and bread".  "That's it?", asked the puzzled counter server.  Indeed, I got ham and bread with nothing else.  Different cultures, different styles.