I had breakfast with an old secondary school friend this morning.  She told me that the last of our school nuns had died last week.  Sister Aloysius (who preferred to be called A-lui-shus)  taught me sewing in Secondary 2 (or 7th grade).  As she lectured us on stitching or unpicking, I often stared out the window to gaze at the next door compound which had a romantic swimming pool and a pavilion.  One day, she smacked me on the head with an exercise book to shock me out of my stupor.

Nuns are what make a convent education special.  They convey Christ's love and teachings by example and instill a love for learning and kindness towards others.  My mother enrolled in Katong Convent in the 1930s.  It was a new satellite school established out of the bungalow where the 'Town Convent' nuns holidayed on the East Coast.  Katong had become a popular residential area for Peranakan and Eurasian girls and parents preferred to keep them closer to home than to send them to school in town.  Years later, my sisters followed suit and attended the same school, taught by Irish nuns in stern habits with names such as Sister Finnbar.  I went there many years later at a time when the nuns on faculty whittled down to just three, including Sister Aloysius.  There was another nun, Sister Josephine, who expounded on humility and cautioned us to be wary of becoming an 'intellectual snob'. The term was not easily understood then but over time, I have come to see what she meant.  Oftentimes, it is pseudo-intellect at best.

I decided to send my daughter to a convent school to gain the same kind of moral values I appreciated from my education.  Recently, a well-loved nun in her eighties stepped down from the school to spend her twilight years in a retirement home for their religious order.  She exuded love and spoke with a genuine care for each one of her little students. My daughter was privileged to have been in the last class she taught.

Priests do the same at the Catholic boys' schools.  I've often been somewhat scared of a priest's black cassock.  Perhaps I've watched too many snippets of scary exorcist movies.  Nonetheless, as a non-Catholic, I was rather dazzled by the fashion style set by Pope Benedict, particularly the red Gucci shoes and the lace tops.  I've since befriended a Jesuit priest who was too thrilled that the new Pope is the first from his order.   This priest I know is cosmopolitan, fun-loving, gentle and best of all, a fabulous Cordon Bleu -trained chef.  Earlier this spring, he whipped up a fancy meal for my husband and me.  Oh I wish I knew more priests like him! 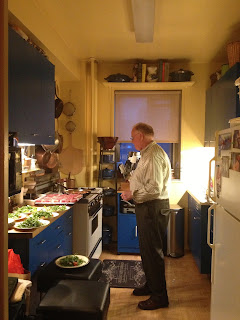 He scripted the menu as such: 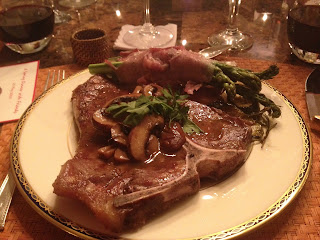