The honest truth to my infrequent blog entries is my addiction to 'Homeland'.  Almost each night, my husband and I would huddle in the dark TV room, along with our cat who is a big fan of Carrie Mathison, and catch up on 'Homeland'.  We only began watching the show in September.  Now that I am a big admirer of the actor Damian Lewis, I have also introduced my husband and children to 'Band of Brothers' - a special Saturday night TV treat for us, especially to satisfy my son's interest in World War Two. 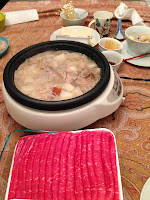 Actually, the wintry months are a good time to do such indoor TV viewing.  Along with having shabu shabu for dinner.  Yesterday was a b-r-r-r cold night and could not be a more perfect evening for that rolling boil that warmed us all.  My children absolutely love shabu shabu.  We used to frequent a nearby Japanese restaurant for Sunday dinner, until one day when I impulse-purchased a Tiger electric hotpot/teppanyaki grill.  I then improvised my meal, adapting from the Japanese cookbook classics like Hiroko Shimbo's.  Nowadays, I stock up on frozen thinly-sliced beef and Kurobuta pork from the Katagiri Japanese supermarket, and add shirataki noodles, bean curd, enoki mushrooms and napa cabbage to the mix.  I season our soup stock with a few tablespoons of miso, dip our meat with Mizkan sauces and cook Japanese rice as a filler.

Shabu shabu is a homey, yet quick and convenient meal for us - a somewhat far cry from the steamboat sessions of my youth.  My mother often experimented with steamboat for our Chinese New Year reunion dinners, much to the frustration of my father.  She would try the mini gas cylinders, the electric pot or the traditional majestic-looking steamboat. There were vivid moments when the charcoal had to be stoked, long pregnant pauses before the fishballs would cook, or the mix of steam and sweat in the humid heat; and a grumpy father who would almost slam the table in agony.  No greater fury than the ill-matched marriage of a large hungry family and a slow-cooking pot.

I'd like to think I've got our shabu shabu nights down to a science and perhaps, if I could do this every night, I probably would.  It's almost like throwing some meat on a grill each summer night.