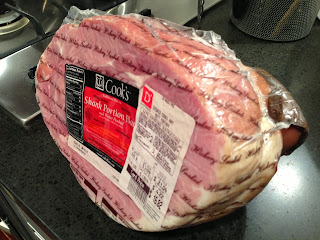 My parents used to bring me along to Uncle and Aunty Brown's home for their Christmas buffet lunch. There was the quintessential Eurasian spread that included Curry Devil.  But the highlights for me were the poached salmon and the honey baked ham from Cold Storage.

Last year, I had my niece's boyfriend courier back to Singapore eight pounds of expensive beef tenderloin and a chunk of ham that by comparison, cost less than US$20. The latter was the bigger hit and my sisters absolutely relished it.  They were in disbelief that the ham was reasonably priced because they usually bought one from the Cricket Club that cost a lot more.

Well, I stumbled on this brand called '"Cook's" more than a decade ago.  The ham was offered in shank or butt portion, already smoked and then shrink wrapped and tossed in the refrigerated area of The Food Emporium meat section.  Nothing fancy.  Since then, I've never been interested in the other types of spiral ham that come with a sachet of maple glaze.  These days though, I find it increasingly hard to find the "Cook's" label.  I once resorted to Smithfield's, assuming that Smithfield was the equivalent for ham as Bresse is for chicken in France - high grade provenance.....until of course, my husband explained that Smithfield was a big brand pretty much like Tyson's for chicken.  And recently, I discovered that Cook's is now part of Smithfield.  Oh well.  Virginia, needless to say, comes to mind when I think of ham.  I remember checking out the smoke house in George Washington's Mount Vernon, where he smoked the meat.

I used the recipe I came across in the New York Times - a simple one from the Shakers. A few years later, my friend's parents who lived in Kolkata, gave me the winning tip.  That I should soak the ham overnight in beer, like the British soldiers did when they lived in the military barracks in India.  Eversince, the ham has been a popular and almost-permanent fixture come Christmas and Easter.

Hopefully, wherever you may be, you will find a hunk of a ham for this recipe.

The night before, unwrap the ham, rinse and pat dry.  Trim excess fat.  Place the ham in a large pot.  Pour beer into the pot and add enough water to cover the ham completely. Leave to soak overnight.

On the day of cooking, bring the pot to a boil, then simmer (15 minutes a pound).  Drain liquid and let the ham cool completely on a baking tray.

Cover the ham with honey, powder with cornmeal and pierce with cloves, about 1 inch apart.

Preheat oven to 370 degrees F and bake the ham for 30 minutes.