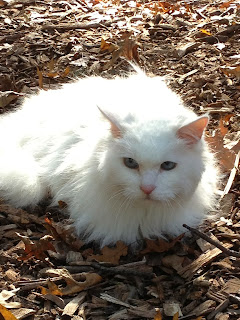 My sisters and I sometimes called my mother "Killjoy".  She pulled out our garden plants as if they were weeds, cleared out my father's large fish tanks, rejected freshly slaughtered chickens because they were too skinny, bundled my stuffed animals into large plastic bags and hid them high up the cupboards never to be touched again.  She was not a fan of keeping pets.  Her excuse was "Minatang ada kuman, nanti kena asthma" (Animals have dustmites, fleas and ticks and you may get asthma too). I once kidnapped a not-so-bright Pekingnese dog who had lost his way and named him Harry.  My mother soon called up my famous Kohpoh Beng Neo who swiftly hauled a cab and re-kidnapped my dog.  She came all decked out in her sarong kebaya.  She renamed the dog Brownie because 'Harry' sounded too much like Lee Kuan Yew.  Then the dog died many years later and Kohpoh cried like mad. Eventually, my mother revealed the reason for her steel-hearted attitude towards pets.  It hurts too much when they die.  She had confided in my sister Molly that she once had a fluffy cat and it saddened her when her pet died.

I've since understood this aspect of my mother, experiencing the same piercing sense of loss and devastation when an old companion departs.  It was a warmer day this past Wednesday.  I cleared my schedule of all my mundane routines - my cat deserved a special day and I wanted to spend it alone with him.  We went to Central Park, a place I always wanted to bring him after coming all the way to NY to join me.  Luckily, we had made it twice before but I knew that today would be his last.  We sat on a huge rock watching the ducks and the tourists and listening to the busker in the background.  "Why didn't I do this more often with you, Meow?", I thought to myself.  The kids are in school now and we could have done this more often.  Reluctantly, I packed up and walked an aimless wander through Fifth Avenue, revisiting the old building which had been our first home.  Lou the doorman comforted me.  (Coincidentally, we now live in a building that replaced the petshop we visited to stock up on his bowl and food when he first arrived.)  As we turned around the corner towards the vet, Meow Meow groaned.  He knew.  Tears streamed down my face and I was a blur of confusion for the rest of the day.

While working in China, I purchased Meow Meow for US$40 from a Beijing pet shop when he was a two-month-old kitten.   In August 1997, he flew to New York alone to join me. The next evening, I met my husband Tracy for a second time and his opening line was “You have a cat, I have one too!”  Thus began a friendship that ultimately led to a happy marriage and two wonderful kids.  That was Meow Meow’s best legacy.

As with any pet, MM had his unique antics.  He loved baths and would signal that he wanted one by knocking the bottles into the tub, chewed on roses (an excuse Tracy gave for seldom sending me flowers), learnt to roll on the floor and could somersault when we held him – much like his Chinese Olympic compatriots.  Our guests remember him for sneaking off with leftovers in the kitchen.  Yet, Tracy and I called him Howard Hughes for often being the recluse, hiding in the bedroom during our parties.

A cat that loved Christmas trees and would notify us of the water level, he died two hours before the Rockefeller tree was lit up for the first time this holiday season.

Meow Meow paced back and forth on the first night when we brought Lizzie home, not knowing what to do with a fellow little creature.  Lizzie turns ten this month and over the years, Meow Meow became her faithful companion.  We will always miss him.  Irreplaceable, memorable – my very best friend. 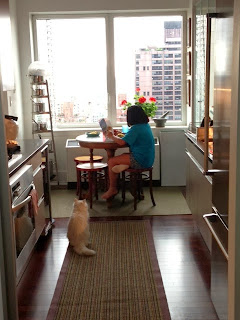 Sharon, thanks for sharing your story, what a beautiful companion :)