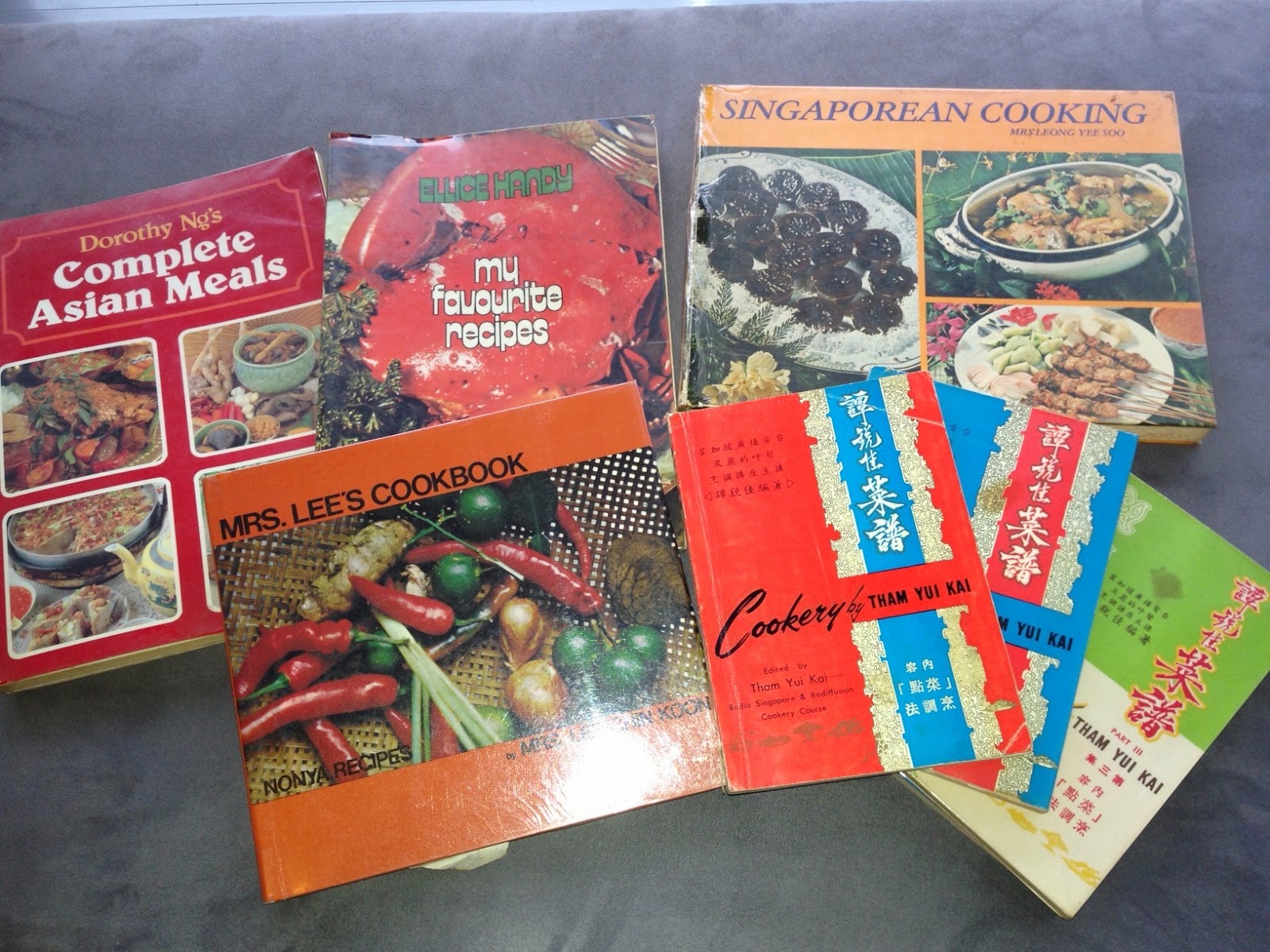 Long before I began giving my mother a new cookbook for every Christmas, birthday and Mother's Day, she had acquired a collection of her own.  These are the venerable titles.  The fact that these authors are all no longer alive was not the sole criterion.  Rather, their contents reflect the kind of everyday food cooked and consumed by Singaporeans.  They were also ahead of the time by the mere boldness to print and thus share their recipes.  Thirdly, they are local curators of recipes and and while the books are mainly written for locals, they are edited well enough to cater to the non-Singaporean segment.  Gladly, these copies are protectively guarded in my home, plastic covers and all.

I love this author!  I never met her but I rely on her fool- proof recipes.  Mrs. Ng was a cooking instructor, had her own cooking show and contributed to women's magazines.   She taught for over twenty years to the Japanese, Europeans, Americans, British, Indians and Chinese.  One would think that she lived in modern day Singapore but no, this was back in the 70s when there had already been a vibrant international community.
Mrs. Ng, like my mother, lived her early life as the daughter-in-law in a big home and had to prepare meals for her extended family.
The cookbook is divided into Malay/Indonesian, Chinese, Nonya and Indian/Sri Lankan, along with Claypot Specials, Hawker Favourites, Curry Powder, Desserts and Savouries.
Many years ago in New York, my old school mates, based in the city to pursue their medical fellowships, congregated at my place to concoct Fried Hokkien Mee using Mrs. Ng's recipe.  It was a roaring success.  We were perhaps unwitting participants of the PlusSixFive phenomena, i.e. overseas Singaporeans who miss their favorite dishes and try to replicate them abroad.


2. "My Favourite Recipes" by Ellice Handy

I have the 4th edition copy from 1974 which makes the book I have, forty years old!  Last year, I had reviewed the latest edition which the publisher had astutely preserved in much of its original text.
Mrs. Handy perhaps wanted this book to be cosmopolitan.  Under 'Contents', there are chapters such as "Different Ways of Preparing Rice" and "Asian Recipes that can be used in UK, USA, Australia and places where Malaysian Curry Ingredients, etc. are not available".
My mother had slipped in bookmarks for the pages covering Gadoh Gadoh (Indonesian salad) and Fried Curry Puffs.  Coincidentally, my sister made the Gado Gado for lunch today and my other sister had bought the Old Chang Kee curry puff for me for breakfast this morning!

No further introduction is needed beyond describing her as The Mrs. Lee - mother of the first Prime Minister and grandmother of the third.  She was the matriarch and she was urged to compile her recipes by one of her daughters-in-law.  Considered the doyenne of Straits Chinese or Peranakan cooking, Mrs. Lee also gave lessons and I for one, remember spending time in her Stevens Road kitchen while housewives gathered about her as she demonstrated.
The original book was a simple compendium all typed out with minimal hand-drawn illustrations.  There is a chapter called "Singapore Dishes for the Western Kitchen" covering curry tiffin and another  on classic Chinese Singaporean specials such as Pork Chop, Foo Yong Hai and Satay Babi Bakar.
Mrs. Lee's book has since been updated and glamorized by her granddaughter Shermay Lee.

Aunty Leong, as my family affectionately called her, was one of my mother's closest friends.  Together, they would ride in Aunty Leong's Volkswagen Beetle down to CK Tang to shop.  All I could remember was steaming at the back of her car, roasting on the sun-baked seat.   I also recall vividly, Aunty Leong opening up her freezer to show us how she stored extra food or ingredients.  There was a frozen pack of char kway teow and about three packets of chicken rice.
There was much excitement within the housewives community that these two ladies were part of, when the book was launched.  Everyone felt that they had contributed ideas and methods, so the book felt like a real part of their network.  Aunty Leong can be applauded for one particular feat - apart from the customary Nonya dishes, she was comprehensive in listing recipes for Western cakes, pies, pastries, standard Singapore fare, Nonya kuehs; Meat, Seafood and Poultry dishes across several cultures.  Kuehs alone are especially challenging and she had the gumption to detail the recipes, no matter how tedious they were.

For that, the book has been reprinted many times over in various versions, formats, sub-sections and volumes. Deservedly so.

Spans Parts 1, 2 and 3.  One of the most acclaimed Chinese restaurant chefs of his time, Tham Yui Kai was a community center cookery class fixture.  The man must have had a lot of charm because apparently, my mother would take pains to set her hair before his classes.
My copies are from 1969, before I was born.  They include recipes for old time favorites such as almond jelly, beef in oyster sauce and suckling pig!

While I have a thinner reprint back in New York, I am now tempted to sneak out all three original volumes back with me.  Especially after my recent foodie trip to Hong Kong, Chef Tham's repertoire of Chinese food sounds familiar once again.