The Baba we are all so proud of.


My sisters cancelled a barbecue we had been planning during my trip back to Singapore.  "Disrespectful.  How to party like that?", they lamented.  No one was in the mood.  Lee Kuan Yew, our first Prime Minister and the permanent fixture in our lives, had died.

Singapore became a surreal sight, a vision I had never encountered before.  Mourners in all-white or black, and grey shades in between.  Then, the images of the Sunday funereal deluge that was as torrential as the sadness.  I literally had vertigo on the day he died, seeing coconut trees spinning upside down while sitting in my beach villa on Ko Samui; and later visited the ER.

After a hiatus of three months, it seemed only appropriate that my first blog entry would be to commemorate the passing of one of the most prominent Babas (Straits-born Chinese).  I wanted to wait for the tributes to settle.  After all, I was only going to be outwitted by the outpouring; the re-postings of sentimentalism online and what he meant to the individual.  Everyone had an opinion about his legacy.  Everyone had a take on his work.  The fact is, LKY wrote his memoirs and his testament of how Singapore succeeded need not be paraphrased by so many.

The commentary was a long time coming.  It depended on who wrote or spoke, and from what angle.  The dutiful politician or civil servant…..the opportunistic overseas Singaporean writer/commentator, the everyday man who felt a debt of gratitude. The tactless man who was relieved that LKY had transformed the nation so that he was spared the torment of being a "foreign worker digging roads in another country". (Now, how would our Asian neighbors feel about this comment? Seriously?)  Others started to compare and contrast, frequently resulting in the Ugly Singaporean pastime of bashing the USA.  Suddenly, everyone wanted to sound as 'clear and crisp', as insightful and articulate as the real man was.  And for the most part, we don't measure up because he was a giant of a different sort.  He still instilled fear and perfection, even in death.  As I was writing an entry into the condolence book, I stopped in my tracks, a panic attack over how to spell 'perseverance' properly.  No mistakes, please, even though he was never going to read it.

After days of cramming the facts, gleaning his autobiographies lining both homes in Singapore and New York - what touched me most were the family portraits.  LKY was a true-blue Baba boy who loved his mother's cooking, "had a sweet tooth for Peranakan desserts" and for much of his life, bathed using the gayong  (scooped up water from a large traditional dragon jar of water).

LKY and my father grew up in Telok Kurau.  My father remembered him as being bookwormish and seriously studious, though he occasionally joined his more boisterous brothers and their playmates (like my father) for a game of football.  My mother - a good friend of his maternal aunts - relayed the tale of the fortune teller who said that the little boy was going to grow up to become a 'ruler' (of sorts), a prediction so impossible and that baffled his mother because then, they only knew of their colonial rulers.

Visual memories and newsworthy snippets came back to me, which interestingly, did not resurface in the media.  One National Day, LKY turned up at the parade wearing a black armband.  His mother had died the day before.  I vaguely remembered her when I accompanied my mother to Mrs. Lee's cooking classes where the ladies chatted in their comfortable Baba patois.  (She, in turn, had taken cooking lessons from my father's grandmother.) Another time, LKY cut short a trip to return to the local hospital for a hushed procedure which he later, embarrassedly admitted, was related to hemorrhoids.  He was human after all.

I had previously credited LKY for incorporating Mandarin and other mother tongue languages into the educational curriculum.  Yet perhaps one of his best initiatives was possibly an extension of experiences from his own upbringing.  The Babas had gained an advantage early on through having acquired the English language, the colonial lingua franca.  This in turn enabled them to communicate fluently with the British and paved their way in business and advances in the civil service.

LKY made English the primary language in Singapore - which therefore allows us Singaporeans to get asked that question worldwide, at least once in their lives…."Your English is good!  Where did you learn it from?"

As a tribute, I am enclosing my mother's recipes for Mee Siam and Putri Salat.
Thank you, Mr. Lee, for sacrificing your life for the greater good of your fellow countrymen. 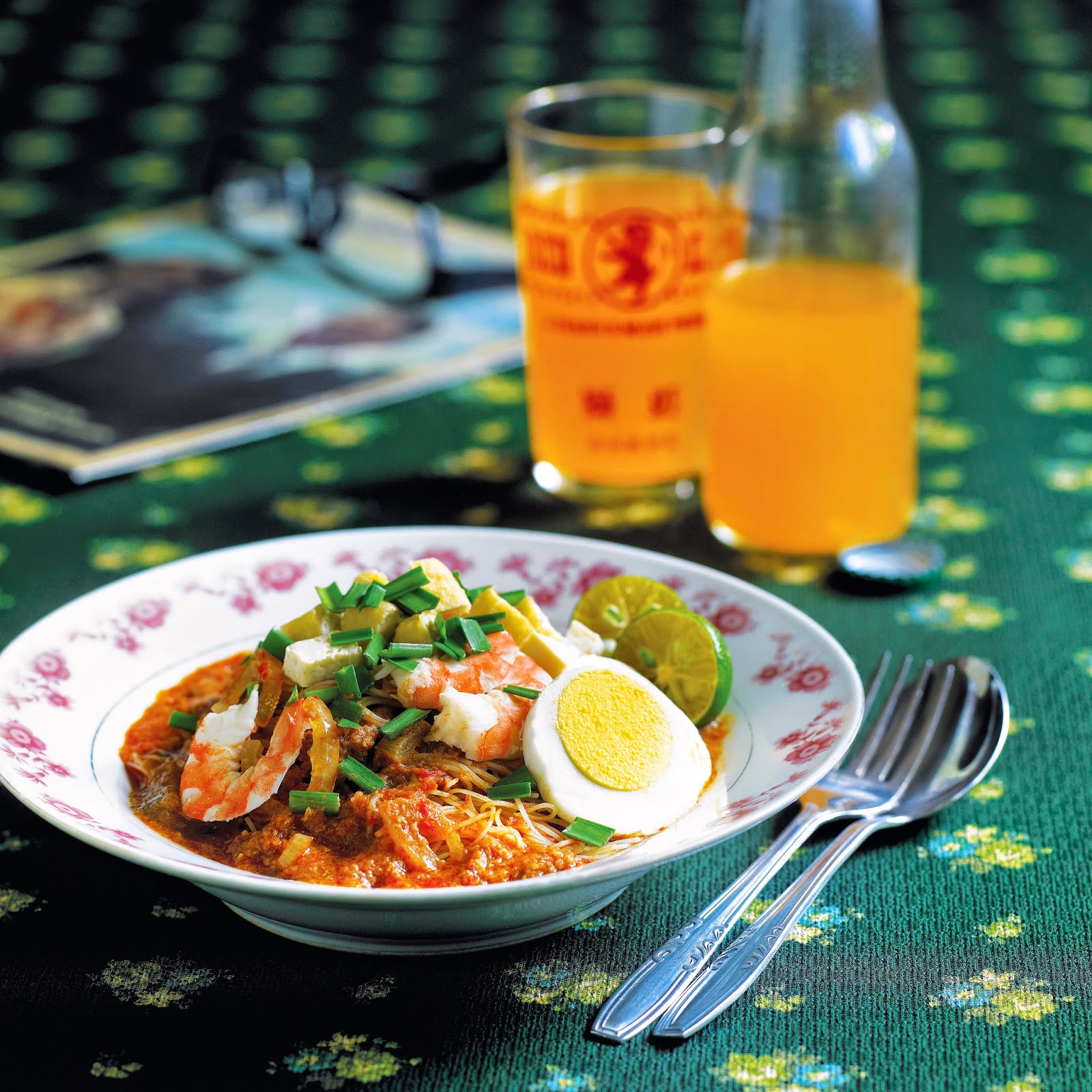 [Tip: This spice paste can be prepared ahead of time and frozen.  Thaw before cooking.]

Having soaked the dried shrimp in warm water for at least ten minutes, drain and pat dry.
Also drain the chopped pieces of dried chili.

Pound or blend the dried shrimp, followed by the dried chilies, shrimp paste and shallots in order.

[On the day of cooking.]

Soak the dry vermicelli in water for at least an hour to soften the noodles.  Then drain the vermicelli.

Line a baking sheet with grease-proof paper.  This will be used to hold the noodles later.

Place the frying pan or wok on high heat and when it is sufficiently warm, add the oil.
When there is a slight smolder, lower heat and pour in the spice paste.
Stir and fry until fragrant and ‘red’ oil bubbles through.
Scoop out some oil and approximately half a cup of the spice paste to reserve for the gravy.

With the remaining spice paste in the wok, add in water, salt, sugar and let it boil.
Then add in bean sprouts and stir for one minute. Set aside the bean sprouts.

Next, add in the rice vermicelli to the wok.
Stir with tongs and let the vermicelli soak well with the spice paste.
Reintroduce the bean sprouts back to the wok.

Lower the flame, fry on medium flame and stir continuously, be careful not to let the vermicelli stick to the bottom of the wok.
Cook until vermicelli is soft and slightly remains moist.
Transfer to a tray lined with grease-proof paper. Let it cool before serving.

Meanwhile, in a pot, add in the half cup of spice paste and oil, along with the pounded salted soy bean paste.  Strain the tamarind juice.  Pour the tamarind juice and the coconut milk slowly into the pot and let boil.
Then add in the sliced red onion.  Turn down heat to simmer.
Finally add in sugar for taste.  [If gravy is salty, add more water and sugar and stir.]

Squeeze lime over the dish, arrange sliced eggs on top and sprinkle with chopped chive.

This quintessential Nonya dessert goes by many names: Serikaya, Serimuka, Kueh Sarlat.
I grew up knowing it as Putri Salat and recall my mother making the custardy kaya top in either green or yellow.  The glutinous rice base was always laced with blue rice, very much like the blue rice grains in Nonya Bak Chang.
12 servings

Method for soaking rice
Rinse the rice three times.  Place the rice in a pot and cover with enough water, at least 2.5 cm or 1 inch above the level of the rice.  Soak for at least 2 hours before steaming the rice.

Set aside the 125ml or ½ cup of coconut milk for the rice.

Steam the rice until it turns translucent, about 30 to 45 minutes.
Remove the tray from the steamer, stir in the 125ml or 4 fluid ounces of coconut milk and place it back in the steamer. Continue to steam for another 15 minutes.

Meanwhile, add in the salt and the 1½ teaspoons of sugar to the 3 ounces of coconut cream.
Divide the cream into 2 bowls.  In one of these bowls, add the drops of blue coloring.

Remove the rice from the steamer.  Mix half of the rice into the bowl of plain coconut cream, and the other half into the bowl with the cream with the blue coloring.
Transfer the two batches of rice back to the original bowl, making sure the two batches lay side by side.
Do not stir them together as yet.  Place back in the steamer and continue to steam the rice for a further 30 minutes.

Remove the tray.  Now use a scoop to stir the rice. Alternate the white and the blue rice so that you achieve a marbled layer of blue and white rice.  Fold a double layer of tin foil and line it on the rice.
Press down with something preferably heavy, such as a pestle so that the layer of rice is tightly packed.

Bring back to steam for another 15 minutes.  Leave it to rest while you work on the kaya.

Method for making the top layer of kaya custard
Add water in a saucepan and bring it to a gentle boil. With a metal mixing bowl (that sits nicely on the saucepan), break the eggs into the bowl.  Handbeat in the 300g or 11 ounces of sugar.  Add in the pandan leaves.
Place the bowl over the saucepan to form a double boiler, cook over low heat, stirring consistently.
[It is important to stir and use a gentle heat to ensure that the eggs do not cook into scrambled eggs, hence the need to use the double boiler method.]

In the meantime, place the rice flour and wheat flour in a bowl.  Add some of the 8 ounces of coconut cream reserved for the egg mixture, to the bowl and whisk to remove flour lumps.
Then pour the remaining cream, whisking again to remove any additional lumps.
If necessary, strain the flour mixture.  Then add to the egg mixture in the saucepan, along with the drops of green coloring.  Continue to stir until the mixture thickens.

Remove from heat.  Discard the pandan leaves.
Pour the custard through a strainer, over onto the tray of pressed rice.

Cover the tray with a wet cloth hanging over the edges and steam on low heat for approximately an hour until the kaya custard sets.   The cloth lining absorbs the condensation from the steam.
Otherwise, the droplets will fall back on the surface of the custard and spoil the intended smooth finish.

It is necessary to use a gentle heat.  Turning the heat up would no doubt cook the custard faster, but it will cause ridges to form in the layer of custard.  Aim for a nice smooth surface

Cool the dessert before serving.