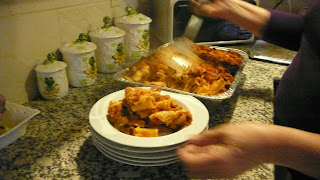 Everytime I watch a movie or TV show where there is a scene of an Italian American family dinner, I would be so mesmerized.  I would be the outsider looking in, imagining an intimate Sunday dinner where Tony Manero or Tony Soprano would be smacked by Mamma for pinching some cold cuts, the same Mamma who would later come out with a big dish full of baked ziti, and a bowl of luscious meat gravy.  This past weekend, I was the insider for a change - after 20 years of living in America.

Mamma Pasqualina in this case is 81 years old.  An immigrant from southern Italy, her husband and her acquired a hardy home that came with the ideal cold basement cellar for storing her home-made sausages, pressed wine and bottles of sauces.  There were rows of glass bottles, arranged with metal pots and trays hand carried from Italy, no less.

The moment we stepped into her home that snowy afternoon, the table scene itself and the awaiting plates of food evoked the words from this book "Elodia Rigante's Italian Immigrant Cooking". 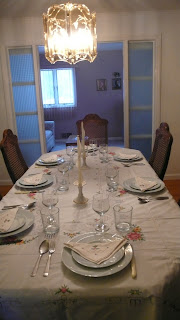 ".....it was customary for the younger generation of American-born Italians to go to their parents' home for dinner on Sundays.  During those dinners, there was always a lot of talk, and a lot of laughter.  Many important matters were discussed, usually with a great amount of passion!  Much of the conversation took place in Italian - and I watched the old-timers tell jokes and laugh until they cried.  Or sometimes, they would talk politics, getting louder and louder and poking the air with their hands for emphasis!  They would talk about work, about food, about the family.  Those weekly get-togethers served an important cultural purpose in our lives - the family bonds were kept tight."

We experienced every single one of these moments that night.  Laughing at my husband for secretly eating up the torrone nougat at home while I accused everyone else of stealing it.  Listening to her talk about her childhood in Italy, and then about her grandchildren.  Or for that matter, about her listening to the Pope's sermon every weekend and following the news on the Italian cable channel.

It is worth noting that Sunday dinner is a misnomer.  It tends to start around 2pm and ends at 8pm, staggered by appetizers, then something hot off the oven, followed by a pause to clean up and then a preparation of cappuccino to go with the dessert.  It's all supposed to be very relaxing.

A proud grandmother, Mamma placed several photo frames of her children and various grandchildren, at different ages, on the shelves and walls in each and every room.  Like my mother, she too had more than one kitchen.  There were a serving kitchen beside the dining area; a work kitchen in the basement to knead her pasta, bake her crunchy Dead Man's Bones (something like biscotti) and taralli rings, and the cellar with a large wooden wine press to squeeze out the last of the fermented grapes.  And Mamma was particularly meticulous to a fault.  Everything was spick and span. 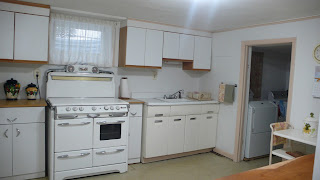 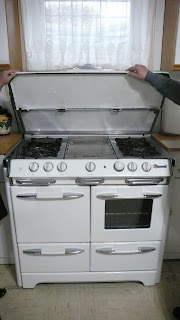 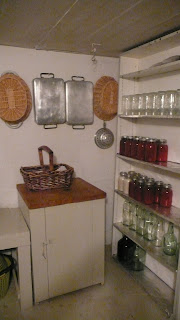 She served us dinner on pristine white linen with cross stitch embroidery done by herself for her wedding trousseau.  And of course, my kids, husband and I stained it with our gravy.

Mamma also taught herself to cook - like my mother.  She felt the need to learn to do so for pure survival.  Living in a small town atop a hill, the concept of a restaurant or supermarket was unheard of.  One lived off the slaughtered pig and learnt to make do with what the pig offered, every part of it. 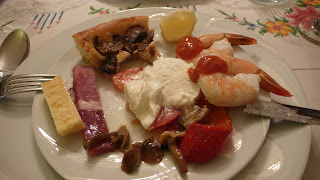 She taught me a few tips.  "Don't fry the meatballs".  Plop them into the gravy so that the meatballs soak up the sauce. If you sear the outside of the meatballs, you would essentially seal them off.  "Tiramisu only takes 20 minutes to assemble".  Hers was the creamiest and as my kids exclaimed, "Out of this world".  The savoiardi lady fingers need to be soaked in Italian coffee and then layered with egg-drenched mascarpone cheese.  Restaurant versions are often more watery because they line the lady fingers on the inner sides of the tray and pour the cheese on the inside.

I sometimes judge the success of a meal by how much my son eats.  He gave a double thumbs up seal of approval by finishing all of his large bowl of baked ziti, and helping himself to a second portion of tiramisu. 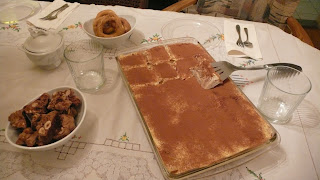 We only hope that Mamma will invite us once again soon.