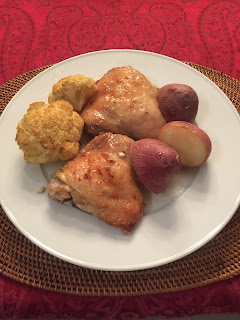 When my kids were younger, they loved this claymation movie called "Chicken Run". It was a very cute movie with chicken characters with names like Rocky and Ginger. The chickens were trying to avoid getting slaughtered and hatched a plan to escape their chicken coop, a la concentration camp style - which was the inspiration for the movie.  Sadly, I never paid my full attention and probably, had never seen it in its entirety.  Later on, my sister gave me a whole bag of stuffed toys that she had collected from a McDonald's Happy Meal promotion.  I was just about to give away them away, when upon inspecting the toys, realized that they resembled the entire cast of the movie.  I've since kept them because they formed a very special part of my children's lives.

I too have my own chicken memory.  My mother bought me two little chicks at a time when I was learning about the growth cycle of chicks in Science class.  The chicks grew up in our backyard, only to be threatened by the street cat.  My mother therefore gave the chicks to our housekeeper to raise.  "Hanky and Panky", as I called them, grew big and sturdy and obviously very fleshy.  They were later served up as my chicken curry for Chinese New Year.  I was traumatized and went on a chicken strike for a few months - a rite of passage for many tweens.

There are two chicken recipes that I tried this past week that are worth jotting down. 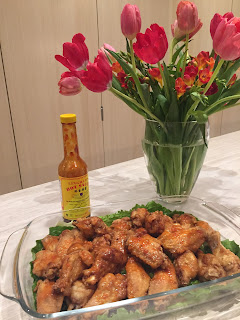 Buffalo Wings were served up for Super Bowl Sunday, albeit my take with Lingham's Chili Sauce.  (Adapted from "The Joy of Cooking").

Coat the wings in the mixture of flour and seasonings.

Heat up a wok or deep frying pot, add enough corn oil and heat.  Add wings to the hot oil - a single layer will do.  Fry for about 10 minutes.  Transfer the cooked wings to a baking tray and leave it in the oven to warm.

Meanwhile, to prepare the sauce, combine in a saucepan over low heat:

2 tablespoons hot pepper sauce, such as Cholula or Tabasco

Remove the wings from the oven and arrange on a platter.  Drizzle the sauce over the wings before serving, tossing to coat gently.

Last night, I prepared Grilled Chicken from "The Aleppo Cookbook" - a city so much in the news and a heartache to watch it get destroyed by war.

Marinate the night before,

2 pounds of chicken thighs, make deep cuts through the skin and flesh

The day of, remove the chicken an hour before cooking.

Preheat the oven to 250 degrees F, place the chicken in one layer in a baking pan and cook for 45 minutes.  In the last 10 minutes, you could turn up the oven temperature to 300 degrees F to finish off.

Serve with boiled potatoes.  (I also added cauliflower to the tray of baking chicken, tossed in the remaining marinade, about halfway into the cooking.) 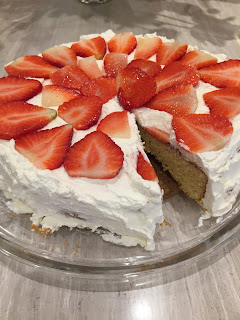 My first memories of strawberries - me as a child sitting in the supermarket trolley as my sister wheeled me around the aisles of the old Tay Buan Guan.  Then she picked up a punnet of strawberries.  A fresh and sweet whiff - a scent I'll always remember - not to be confused with the saccharine smells associated with the Strawberry Shortcake character.

I've always fancied the Victoria Sponge cake and was enticed by an attractive food shot in 'Mary Berry's Complete Cookbook'.  (She of the 'Great British Bake Off").  So I made the cake today, my way.

Whisk the butter and sugar, followed by one egg at a time.  Add the vanilla essence.  Continue at high speed until the mixture is pale, smooth and thick.

Pour the cake mixture into the tin (or divide between the two 7-inch tins).  Bake in the oven for 25 minutes.  Remove and leave to cool.