The Barber to the President 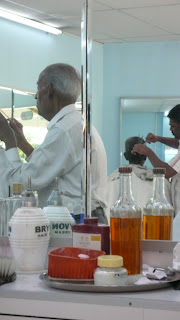 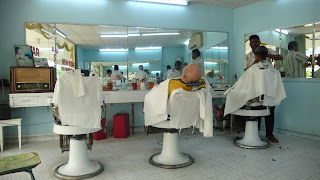 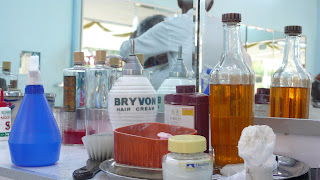 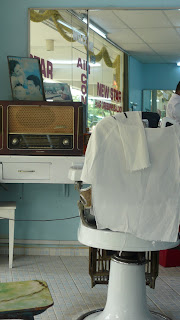 Today in Singapore, there is a presidential election of 'historic proportion' (as Obama has said of Hurricane Irene). It also marks the retirement of the current President S R Nathan.

President Nathan is known for many good things - for his humble demeanor and his friendliness among others. My father got to know him when the two kept bumping into each at the beach each morning. They even appeared in the Straits Times together. When my father stopped going for his morning bike and swim routine, President Nathan wrote to check on how he was doing. And the two shared the same barber.

New Star along East Coast Road has been famous for a while, especially now as the barber to the outgoing President Nathan and many other MPs. It's like the Singapore equivalent of Caswell-Massey...which supplied cologne and after-shave products to George Washington and JFK.

The Indian barber has been a fixture in my neighborhood for as long as I can remember. My dad and my brother-in-law have been going to him for years. Lately, my husband has become a loyal client as well. Whenever he arrives from New York in the early morning, he would make his way to New Star by 9am. New Star has overtaken Zam Zam murtabak as his must-do activity. We joked with the barber that we loved him so much, we even bought a new apartment down the street just to be closer to him.

I don't know his name even though he has been featured a few times in the media. For the longest time, we assumed that he only spoke Tamil or Malay...my sister once spoke to him in pidgin Malay, only to get a reply in fluent English, much to her embarrassment. He is always well turned out in his crisp white long-sleeved shirt and belted grey pants. He has sons who have white collar jobs of their own. And a retinue of fellow Indian barbers who now seem younger - perhaps he is grooming (excuse the pun) a new generation to take over. More soberly, he has this small table right in the middle of his saloon. It has a glass top under which there are all these little passport photos of men. One day, the barber simply told me "These men all worked for me....they have died." Hmmm.......

I can understand why so many men and their little sons go back to him faithfully. (My son is not used to the buzzer. He screamed high heavens.) The cut is affordable, especially when men's hair need frequent trimming. Yet, the atmosphere is an enjoyable step back in time. It's a living museum, dotted with fixtures that these expats would desperately die for but which the barber wisely would never sell. The Rediffusion, the springy barber chairs, the various lotion pumps and the giant glass jar with the antiseptic to treat the combs.

For many years, the barber had been on the north side of the road, tucked in a traditional shophouse that matched his interior. He was booted out in favor of a smelly durian vendor. But no worries, the barber simply moved across the road to a new building because he had cleverly saved up and purchased a storefront many years back. Such a testament to the scrimp and save wisdom of immigrants like him.

He must be in his 70s at least, but we hope to see more of him. Along with my retired Hokkien mee hawker, he is part of what makes it so comfortable when I come home to Singapore.