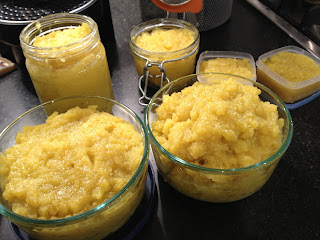 There was a week in December when the word 'kaya' popped up at least three times.  On one occasion,    I had attended an evening soiree - a book talk by a young writer.  She extolled the wonders of a dish by Susan Fenniger.  It was a stylized version of a Ya Kun breakfast - a poached egg atop kaya toast, drizzled with soy sauce and sprinkled with ground pepper.  Then, I met an old Singaporean friend twice at the doctor's office.  She asked if I could make some kaya because she loved and missed it.

Kaya is this wonderful custardy jam made of eggs, sugar, coconut cream and infused with pandan essence.  It is a ritual to have it for breakfast, spread on toast or smeared on buns, often dipped in a saucer of swimmy half boiled eggs doused with soy sauce and a dash of white pepper. 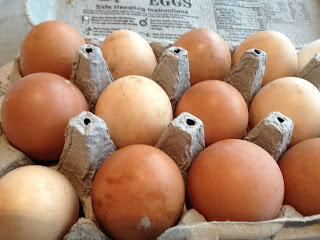 Recently, our friend sent us a carton of fresh organic eggs.  About three years ago, he had moved upstate and become a gentleman farmer with a ranch full of cattle and chickens.  His eggs looked so shockingly wild! There was no doubt that they were never tainted by chemicals.   I decided to make kaya out of them.  It was just as well.  Last week, my father was hospitalized for a spinal injury and underwent surgery.  Eggs, proteins and muscle-building came to mind.  What better than sweet kaya to perk him up as he goes through rehab.  So I made my egg jam and packed a bottle for my husband to courier back to Singapore.  Alas, it was confiscated at the departure gate for security reasons.

Kaya also means 'rich' and once, while my mother was making it, we talked about what we would do when we became 'kaya'.  We would immediately hire our gardener Muthu to become our chauffeur.  Kaya - the stuff of sweet dreams.

Method
In a metal bowl, whisk eggs together.  Add sugar a bit at a time and continue to whisk to dissolve sugar.
Stir in the thick coconut cream well.

Bring a small pot of water to a boil.  Lower the heat so that the water in the pot is just below boiling point.  Rest the metal bowl of egg mixture on the rim, over the pot and whisk continuously until the mixture thickens.
[This is an adapted method to cook the mixture and dissolve the sugar without curdling the eggs.]

Strain the mixture with a sieve into a heatproof bowl, preferably with side handles.
Add the knotted pandan leaves to the mixture.  Crush the leaves gently with a spoon to release the flavors.

Place a metal stand in a large or Dutch oven pot.   Fill the pot with cold water, almost up to the height
of the stand.  Bring to a gentle boil.  Wrap the lid with a kitchen towel to absorb water condensation
droplets which may fall on the kaya jam and impact the texture.  Place the heatproof bowl on the metal stand.

Whisk or stir mixture frequently for the next quarter to half an hour to break up any clumps.
[At this point, skim the top of the mixture with a slotted spoon to remove lumps.]

When the mixture begins to thicken, cover and simmer for another half an hour to an hour. 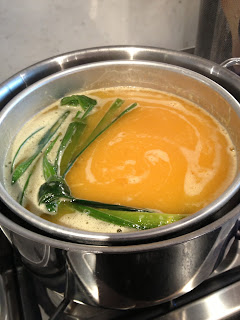 Replenish more hot water to the pot if necessary.

Turn off the heat when the jam mixture becomes firmer.  Leave the jam to cool completely before storing in air-tight containers. Discard the knotted pandan leaves.  Refrigerate the jam if you wish to keep it for a few
weeks.