(Not) my grandfather's road 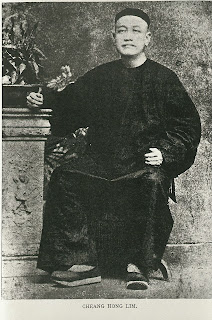 I once had grandiose visions of me posing for a photo standing in the middle of Cheang Jim Chuan Street - which is now relegated to being a slip road leading to a carpark complex in 'town'.   Town meaning the 'Shenton Way' financial area in Singapore.  Cheang Jim Chuan is my mother's paternal grandfather.

Recently, there was a lot of news about the protest rally in Singapore against a government white paper on population.  The venue was at the Speakers' Corner in Hong Lim Park.  When I told my husband, he chuckled momentarily.  Perhaps he too was having grandiose ideas that a political Spring might be born in a park named after his wife's ancestor.  Imagine Tahrir Square......

Hong Lim Park is named after my great-great grandfather Cheang Hong Lim.  As a child, my mother would narrate stories about her family and even helped me trace out our genealogy.  It was amazing that all the names, their years of birth and death, remained so vivid in her memory.  So by the age of eleven, I would visit the public library to read up more about Cheang Hong Lim.  Imagine, research without wiki or google in those days.  I guess local students in Singapore do not study these 'pioneers'.  However, a friend came up to me recently and told me that she had learnt about 'Zhang Fang Lin' when she attended a school run by the Hokkien Huay Kuan, possibly Chung Cheng High.

This is the very first excerpt I came across about my ancestor, in its entirety, written by Tan Ban Huat.....

Born in Singapore, he was the eldest son of Cheang Sam Teo, who had migrated here from China.
Sam Teo, and his partner, Tay Han Long, ran a monopoly business in opium and sirih (the betel vine) for some time, trading under Chop Teang Wat at Telok Ayer Street. After Sam Teo's death, Hong Lim took over the business and operated under the name of Cheang Hong Lim and Co., which later became Chop Wan Seng. Hong Lim and his partners, Tan Seng Poh and Tan Yeok Nee, also monopolized the opium and spirit farm. He later ventured into shipping and the property business.

He built a lot of houses along Havelock Road from Chin Swee Road to the upper reaches of the Singapore river, as well as within the town itself.  He became so great a property-owner that there was a saying, "You can be as rich as Hong Lim, but never have as many houses as Hong Lim."

In 1876, Hong Lim donated $3,000 (a large sum in those days) to convert an open space in front of the Police Office at South Bridge Road into a public garden.  His offer was accepted and iron railings were put up around the park, which was then known as Hong Lim Green and later, Dunman's Green. It is now popularly known as Hong Lim Park.

Like many community leaders in 19th century Singapore, Hong Lim contributed much to education by donating funds for building schools and setting up schools for the poor.  He donated $3,000 each to Penang Free School (1876) and Convent School (1890).  In 1875, he set up a school at Cheang Wan Seng Place to teach English.  Poor children attended his classes free.  Later, he set up Cheang Jim Hean Free School at Havelock Road. Headed by his son, Jim Hean, the school had an annual intake of 100 students.

Another event worthy of mention was his effort in persuading the mother of Lim Boon Keng to let her brilliant son continue his study at Raffles Institution.  Boon Keng had been asked to stop his studies soon after his father's death.  Mr. Hullet, then Principal for R.I., approached Hong Lim for help as the two families were friends.  Boon Keng continued his studies and later became the first Chinese to win the Queen's Scholarship to pursue his medical studies at Edinburgh University.

In 1863, Hong Lim erected at his own cost, a Chinese temple known as "Geok Hong Tian" at Havelock Road.  He also contributed much to the erection and repair of many temples put up by other clans though he belonged to the Teang Thai clan.  To serve the needs of many residents who stayed in Kim Seng Road and the Havelock area, he built a market at River Valley/Kim Seng Road in 1882.  The market was maintained for several years.  The site is well known as Hong Lim market.

Another contribution by Hong Lim was the setting up of a fire brigade under his name, Wan Seng Brigade.  The 37-man fully-uniformed Brigade received much praise from the people.  In 1886, a fire broke out at Drummond Hodges and Co.  The Fire Brigade was then unable to put out the fire because of engine trouble.  Wan Seng Brigade was summoned and eventually put out the fire.

Hong Lim actively identified himself with the public life of the Straits Settlements.  He was for many years on the Committee of the Po Leong Kuk (a body looking after the welfare of women and girls) and several other public bodies.  In 1889, he received thanks from the Governor for being the largest contributor ($2,500) towards the fund for providing Maxim guns for the Singapore Volunteer Artillery.

For all his services to the Chinese community and the public at large, he was made a Justice of the Peace in 1873.  In 1891, he was recognized by the Straits Settlement as the Hokkien community leader.  A procession led by St. Joseph band was held at Havelock Road to celebrate the occasion which was well-attended by his Hokkien group.  Three weeks later, he held a tea-party for his well-wishers.  The Governor, Sir Cecil Clementi Smith, was also present.

He fell sick the following year and died a year later at the age of 52.