Why and How I Wrote "Growing Up in a Nonya Kitchen" 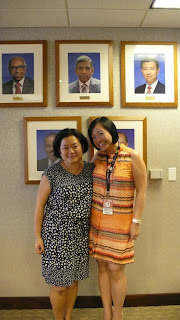 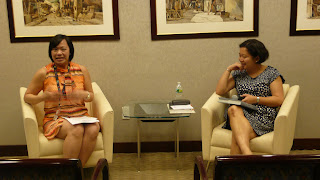 Last week, I was invited to talk about my book at the Singapore Permanent Mission to the United Nations. I cherished that Tuesday afternoon.  Over the next few days, I mulled over what I should have added to my Q&A to make my answers more coherent.  So here goes....

1. What inspired me to write the cookbook and how did it end up becoming a memoir?
In early 2001, having lived overseas for quite a while, I took a leave of absence from my job to focus on my MBA.  My friend suggested that I spend my spare time with my parents.  Earlier on, a brother-in-law of mine had given me a pearl of wisdom....."If you miss food from home, learn how to cook it."
With all this advice combined, I asked my mother to share her recipes with me, in the hope of compiling them into an informal family heirloom cookbook.

Her death later that year changed my initial plan.  I decided that I could perhaps expand the idea to be a published commercial cookbook.  My family had their reservations as it meant that I would share our kitchen secrets with others.  Being full-blooded Peranakans, we knew fully well that every family prided on their family recipes being 'the best' and were keen critics of everything else.

I wanted a different angle.  I did not want to compete against the several authoritative Nonya cookbooks that had dominated the shelves for decades.  I needed to differentiate.  I had always found these memoirs such as "Memories of a Nonya", "The Babas" and"The Patriarch" to be nostalgic and engaging and wanted my book to be in the same vein.  I realized that my mother's life represented a fading generation of "professional housewives" during such a transformative era in Singapore history.  The two concepts could be melded.

I based my cookbook around a time frame that others could relate to, especially for those who remembered the country as they left it.

2. How did my experience overseas help with the creative writing of this book?
Visiting museums is a big part of the New York experience.  Over the years, I'd visited the Tenement Museum, Ellis Island and of course, the Metropolitan Museum.  Along the way, a visitor develops an appreciation for antiques, life stories, history and culture. All this exposure created a heightened awareness of my heritage and a quest to find out more.

Besides, I had lived in China and often felt misplaced by the fact that Chinese Singaporeans were not considered 'brethren' like the Taiwanese and the Hong Kong Chinese.  Especially as a fifth generation Nonya who grew up struggling to cope with Mandarin, I felt the need to understand my Peranakan identity.


3. Where did I obtain additional information and inspiration?
I took my rudimentary exploratory skills back to Singapore.  My first stop was the Peranakan Museum to get an overview of the various aspects of the Peranakan culture.  This was a 'refresher' of sorts as I had first done research back in NUS for an anthropology project.

At the Peranakan Museum (which I went umpteen times with my children), I studied the layout of the tok panjang and connected it with my recollection of our Chinese New Year lunch table.  The museum display clarified for me the purpose and position for each dish and the accompanying use of various dinnerware pieces.

I explored my own backyard - Katong.  I walked through the five-foot ways of Joo Chiat to retrace the steps to my grandfather's house. I walked to 73 Lorong K in Telok Kurau to gain a sense of the old atmosphere of my parents' first home, as well as other parts of Telok Kurau which featured in the cookbook.

The TV series "Little Nyonya" was also helpful.  Because the domestic skills were heavily featured, I took an interest and eventually decided to learn how to sew the kasok manek shoes.  I also sought to learn how to wrap kueh chang and kueh bongkong.

Most useful was my membership of the Peranakan Association.  The regular magazines became a source of valuable anecdotes and facts that helped me learn more about my culture.  I read every issue from cover to cover.

Towards the end of my cookbook project, I began to scour old Straits Times archives to learn more about my family history.  Someone had written about online research in one of the Peranakan Association magazines.  I found a treasure trove of information on the web and suddenly, my ancestors became real for me.  One of the ancestors' photos in my book appeared as a result of an online article about the Bukit Brown redevelopment.

I collected as many books on the Peranakan culture - be it about jewelry, embroidery, porcelain, architecture or cooking.

I went in search of all the sources for my mother's cooking utensils and ingredients.    I hunted down Gim Hin Lee for baking goods, and the kitchen supply and popiah skin stores in Joo Chiat.  I spoke to the shopkeepers, including a few who knew my mother and could provide anecdotes for me.

Finally, I interviewed the female relatives who bonded with my mother over cooking.  Copious notes were taken over several glasses of Ayer Bijik Selaseh.  I was fortunate enough to be tutored by Kopoh Beng Neo when it came to pounding rempah.

4. How did living in NY impact the production of this book?
It became more and more apparent over time that producing the book in NY was not so feasible when it came to the food photo shoots.  Running school errands with two children meant a constant disruption to the flow of the day and it was not ideal for preparing several dishes to shoot.  It was better to do so back in Singapore where I could recruit the help of sisters and the publishing team.

I did manage to test my recipes.  In the course of ten years, I also witnessed more and more of our Asian ingredients becoming readily available.  Lemongrass, jicama, even turmeric and chili could be  found in neighborhood supermarkets. 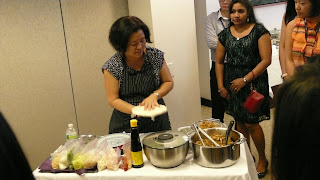 I participated in several workshops and cooking classes.  I attended classes on "How to Publish a Cookbook", "How to Write Recipes", "How to Develop New Recipes" as well as completed courses on the techniques of French and Asian cooking.  There were Western instructors who were very well-versed in Asian cooking and had written comprehensive books on Southeast Asia cuisine.  One of them even enlightened me on the origins of the long, red Holland chili as well as the distinctions of belachan and gula Melaka from different sources.

I made sure to write the recipes in a format that was 'cook-friendly', i.e. with proper measurements and as detailed descriptions of the ingredients.  The most challenging aspect was that many of these vintage recipes came in old measurements, or none at all!  For example, 20 cents chili or, 1 coconut.  So I had to find a way to quantify several 'agak agak' estimations through trial and error and research.   At the end of the day, one should cook and adjust according to preferred taste.

5. What special touches did I add to the book?
I was adamant that the illustrations had to reflect the mood and nostalgia associated with the narrative.  I personally sat through the photo shoot sessions to give input on how we presented our food, which dishes we used (most of the props are from my mother's collection) and what our table settings would have been like.

We incorporated the kebaya embroidery of a peacock on the chapter pages.  My mother used this kebaya at my wedding.  The brown tiles in the chapter about kitchen utensils, is based on the actual tiles in my neighbor's house in Yarrow Gardens.

6. How can a reader best use this book in the US or outside of Singapore?
Start off with the simpler recipes such as almond jelly, chicken drumsticks, meatball and tofu soup.  Meanwhile, explore your local Chinatown to get a sense of the available ingredients.  Then get more ambitious from there.
Even if you don't cook from the book, I hope that reading the recipe headers and the memoirs will evoke happy memories of your Singapore experience too. 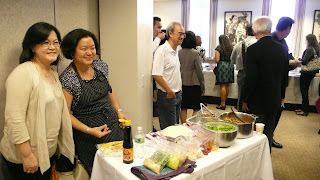 I just bought your book "Growing Up in a Nyonya Kitchen" this afternoon from Times Bookshop in Petaling Jaya today. I spent the whole afternoon reading from cover to cover. What a joy it is to read your stories and poring over the recipes! Thank you so much for sharing your mum's cooking and sharing your family stories.

It brought back a lot of memories for me. My mum used to cook many of the same dishes at home in Ipoh but due to old age, she has stopped cooking (she's 77 years old now). She learnt them from her mother in-law, my grandma who was a Nyonya lady from Taiping. Again, my sisters and I have not taken cooking seriously even as we become mothers, always looking for short cuts due to time constraints (and laziness!).

Thank you very much for writing this book and showing all the delicious food. You have inspired me to be a better cook for my children.

May God bless you and your family.

Thank you for your kind words. Such comments motivate me to write more often and I hope to do so, after such a long break!