I've been stocking up my fridge in Singapore, not so much out of need but more out of a compulsion to fill an empty space.  So I have popped into more supermarkets than Charles and Keith shoe stores or Zara, loading my basket with 'stuff'....stuff that I most likely won't use up and will panic about consuming before I leave.  Ever since my husband can remember of his leisure trips to Singapore, it has always been about me making my daily excursions to NTUC or Parkway Parade (to shop at Giant and Cold Storage).  He would shake his head in wonder.  Supermarkets have always fascinated me and this 'activity' intensified when I began my first job at M&M/Mars.  I spent the first few years making 'market visits' to twenty-odd outlets each day, be it in Hong Kong, Sydney or Shanghai, literally pounding the pavements to inspect who was buying our chocolates and food products.

Now as before, the quintessential housewife like my sister would actually prefer to buy her fresh ingredients from a wet market.  I was once told that the shoppers who could splurge made it a point to be there the earliest in the morning to get first dibs on the fish, meat and vegetables. Then it would trickle down to the rest of us who either woke up too late or settled for the cheaper cuts and discounts.  The supermarket was often a stopping point later on to pick up dry goods. 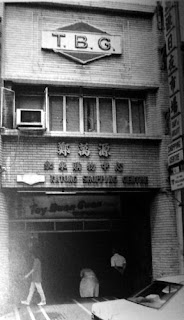 My first recollections of a supermarket was Tay Buan Guan.  It was situated behind the Red House Bakery in Katong and accessible by car through the narrow lanes of Joo Chiat, or by walking through a dark alleyway that cut through to the main East Coast Road.   As I'd written in my cookbook, I would associate Easter bunny chocolates and fresh strawberries bought there with what was 'best and fresh about living overseas'.  (Apologies for sounding pompous.)

There was also a Fitzpatrick's supermarket along Orchard Road, possibly where Paragon is now situated.  It was a sizable one-storey building and as I recall, a popular expat destination.  Supermarkets  like Fitzpatrick's and later, Jason's, were the places to purchase important Christmas staples such as honey baked ham.  At least, that is what I remember as a child.  Paragon now houses 'Marketplace' which offers up an international selection.  Perhaps, to obtain Waitrose sauces, Duchy Originals biscuits or Hediard tea.

These days, we find the ubiquitous Cold Storage or NTUC proliferating every few miles.  In a way, thank goodness for that.  I'm rather relieved that I can finally walk to a nice, new Cold Storage without having to take a bus or cab to Parkway Parade once again.  And pity about the demise of Carrefour which expat friends lament about missing their cheese and wine selection.  Carrefour brought much joy to my parents who would 'destination-shop' there for hours.

And so, I end with a peek into my fridge at midnight, wondering what to stock up next when I pass by Cold Storage tomorrow.