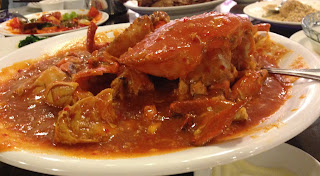 A neighboring family at Yarrow Gardens was credited with introducing chili crab in Singapore.  The patriarch had been a police inspector and the recipe was apparently his wife's.  Eventually, their little business grew and became synonymous with Singapore's famous seafood scene.  Late each night, their only son would drive speedily past the corner where we lived, followed closely by a Cisco security car behind him.  The son came home with loads of cash from their restaurant, this during the 1970s when credit cards hardly existed. 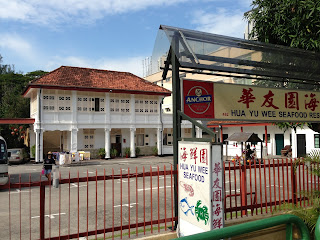 Perhaps because of where we lived, out east, venturing to the nearby seafood restaurants was a regular family outing come birthdays and weekends.  Before the advent of the sterile East Coast seafood center fronting the reclaimed beach, the old seafood establishments lined Upper East Coast Road.  These included Kheng Luck (a majestic white bungalow on concrete stilts), Palm Beach (zinc-roof shack, open air), Long Beach (cozily tucked away at Bedok Corner).  These were relocated and the land sold to private developers who built condominiums and towering houses.  In the case of Long Beach, it became part of a country club.  Only one restaurant still remains along that old stretch, Hua Yu Wee.  On my last visit there almost a decade ago, the managing family continued to live in the main house.  The dinner tables set behind the house faced a military practice area where tall casuarina trees grew peacefully.  That scene alone captured a different era, back when that old stretch actually faced the real sea before reclamation set in and produced the East Coast Parkway expressway.
at August 23, 2013