The Other Ancestor - Gan Eng Seng

My sister just sent me another newspaper clip about Cheang Hong Lim.  Much had been written about him in my cookbook because my mother was a direct descendant of his.  Perhaps, I should have elaborated on my other illustrious ancestor, Gan Eng Seng.

As a young bride from a wealthy family with their own cook, my mother had little experience in the kitchen.  She was soon required to prepare meals for her in-laws and was therefore subjected to a punishing regimen under my father's blind grandmother.  This lady was a wife of Gan Tiang Tock, the eldest son of Gan Eng Seng.

A researcher had recently asked me if there had been a deliberate decision to join these two families, as was common among the high-born Peranakans of those days.  His assertion was that this was often done to preserve the dowry and fortunes of the bride.  My mother had never mentioned anything.

Gan Eng Seng was born in Malacca in 1844.  At least, this is one connection I have to that fabled city.  He came from a poor family and migrated to Singapore at the age of 17 where he began work as an apprentice in the Guthrie Trading Company.  With his diligence, he impressed one of the partners, Thomas Scott.  Eventually, Gan Eng Seng rose to become the chief compradore, a position he retained for 25 years at Guthrie until his death at the age of 55. At the same time, he operated fifteen other businesses of his own, including the supply of labor and transport for the Tanjong Pagar docks.  The latter allowed Gan Eng Seng to amass a fortune, enough for him to become a pioneer in education and a notable philanthropist.

Perhaps his major accomplishment was the founding of the Anglo-Chinese Free School at Telok Ayer Street.  This all-boys' school was later renamed the Gan Eng Seng School and it still exists today.  It was the first and only school in Singapore set up by an individual who provided the land, building and endowment to operate the school, distinct from the many others which had been founded by ethnic clans or Christian/Catholic missionaries.  I sometimes ponder at the irony - the anxiety that went with placing my son in one of New York's boys' schools and the fact that an ancestor founded a reputable boys' school more than 125 years ago.

In addition, Gan Eng Seng was instrumental in the setting up of Tan Tock Seng Hospital by donating the land for its original building along Rochor Road.  Interestingly, he was a founder of one of the most exclusive clubs in Singapore, nicknamed the Millionaires' Club and officially called the Ee Hoe Hean Club.

I went to visit his family gravesite at Bukit Brown earlier this year and was struck by one anecdote.  This clearly represented the kind-heartedness and generosity of a man whose qualities, I hope, will continue down the family line, at least with mine.  Among all the family members buried at that plot, his butler's grave stands beside his. 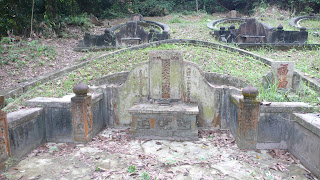