Last of the Big Spenders 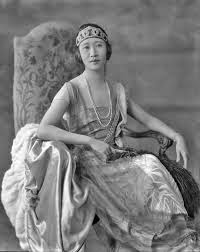 The new year is usually a time to make resolutions.  While I don't think I could ever complete one, I make an endeavor to spend less.  Or at least start the year spending less….. 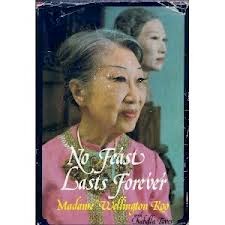 I have just read this autobiography called "No Feast Lasts Forever".  It's obscure and out-of-print.  "Crazy Rich Asians", the voyeuristic, thinly-disguised book that allows people to peer into the lives of the wealthy in Singapore, pales in comparison.  Written by Mrs. Wellington Koo, "No Feast Lasts Forever" is a frank telling of her rich and privileged lifestyle which spanned Indonesia, Singapore, Hong Kong, China, Paris, London and New York.

A few months back, a confluence of coincidences had piqued my interest in this particular writer. 1) I had just attended a close friend's wedding where there were several Chinese-Indonesian relatives (I understood what they were saying and chuckled at the conversation concerning the need to don a corset  to look slim), 2) a newspaper article featured the 109th birthday celebration of a Mrs. Wellington Koo, 3) Park Avenue acquaintances who told me that this same matriarch lived upstairs and played mahjong with equally elegantly-clad Chinese friends, and finally, 4) a PR release by the Met Museum about their upcoming Chinese-themed fashion exhibition which will feature clothes once worn by Mrs. Wellington Koo.

Long story short, who was this Mrs. Wellington Koo?  Well, there were two (and actually, more) and the most famous one was the Mrs. Koo of the 1930s and 1940s whose clothes will indeed be featured at the museum.  The 109 year-old is a later wife.  It was the former Mrs. Koo (nee Oei Hui Lan) who wrote her autobiography and who was the person of interest because the Peranakan Association had once featured her in an article.  The indulged, favored daughter of Indonesian sugar tycoon, Oei Tiong Ham (Oei is pronounced Wee), she was considered the first Nonya to make it to the international scene as the wife of Nationalist China's most famous diplomat and a founder of the United Nations. 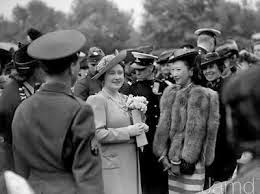 "No Feast Lasts Forever" is a cautionary tale of how unimaginable riches dissipated in a lifetime after a series of memorable opportunities to hobnob with the most notable figures of the 20th century. Mrs. Koo wrote this in her twilight years after her husband had moved on to another wife.  She was never to return to Indonesia to reclaim her assets, her father's business was broken up by the anti-Chinese government and he himself, had several children claiming a piece of their trust fund pie.

It made for fascinating reading because Oei Hui Lan was a glamorous, cosmopolitan and sophisticated woman who had an unusually unrestrained lifestyle compared to most of her Nonya peers back in Southeast Asia.  She was a generation before my mother, born in the late 1890s and she witnessed the unfolding of War World Two in Europe and the emergence of Communist China and Nationalist Taiwan.  This book was her firsthand account.  Her mother's separation from her tycoon father enabled her mother, sister and her to move to Europe where they parked themselves in the most exclusive residential enclaves and spent extravagantly.  To have mingled among aristocrats in London and their weekend country houses  in the 1920s illustrated that with money, race was not an issue so long as you had class.  She was, in essence, the Lady Mary Crawley of her crowd.  Her mother only spoke pidgin English, yet made fast friends with the princess of Monaco.  They brought along her mother's Malay maid and a cook who could prepare her mother's favorite spicy dishes wherever they travelled in the world.

Before they had moved, Hui Lan had actually been educated by a British governess in Java.  Of languages, she wrote "Being multilingual is a natural way of life to me.  I slide easily from one language to another when I move from country to country.  I speak English with a British accent or an American, depending on where I am.  My French became polished and authentically Parisian when Mamma bought a house in Paris….The Chinese in Java spoke Fukien which is very difficult.  In family circles, Fukien was the official tongue…. Lower Javanese is spoken when addressing inferiors, middle Javanese is spoken to equals.  All the servants spoke Malay; it was a servants' language."

There were the gilded dinner sets and jewelry…"I had left the house on Curzon Street, sadly saying goodbye to my little Daimler….Mamma was ordering a specially built gray Rolls-Royce with windows so large, people would refer to it as 'The Crystal Palace'.  It was her idea of what was proper for the wife of a minister and would arrive with a chauffeur outfitted by Dunhill, of course.  As a wedding present, she ordered a 36-piece dinner set from Regent Street.  The soup and dinner plates were solid silver, the dessert plates and serving dishes were gold….."

In the first section of the autobiography, Hui Lan described in vivid details the plantation compound she grew up in, in Java.  She was also honest about the subtle racial disparity between the Dutch colonials and the Chinese immigrants despite their newfound entrepreneurial success.

Most interesting for me, she explained her ancestry which helped me understand how Peranakans evolved as a community.  Her paternal grandfather left Amoy, China and moved to Java, Indonesia.  There, he sought refuge in a camp and impressed the camp owner with his intelligence, so much so that the camp owner, a local Chinese, offered him one of his many daughters.  In typical Chinese immigrant fashion, he worked hard and lived frugally, eventually becoming prosperous.  Yet, he maintained his Chinese identity closely because he was not accepted by the Dutch and the Indonesian natives considered him a 'singkeh' (new guest).

I once had to educate my first boss, an Englishman, about who the Peranakans were.  After he read the book I'd lent him, Felix Chia's "The Babas", he quipped, "Ah, now I understand your lot.  Last of the big spenders."

Truly indeed, this other book by Mrs. Koo, would put that description to practice.

Thank you for your comments. This topic fascinated me after an exhibition I attended in Singapore on photographs of high society and royal personalities of the east who travelled to London to be photographed by Queen Victoria's photographer. Ms Koo wrote an earlier book when married to the minister about the life and times of the well to do. I understood one famous political leader's wife sought to suppress its publication. I have tried to find that book but to no avail. Have you come across that publication?

Thank you for your feedback. No, I have not come across this title and if I do, I will let you know! I suspect it could very well be this very book I read. It is the only one, on record, written by her.

There are in fact two books, the later "No Feast Lasts Forever" (co-authored by Isabella Taves) and the earlier 1943 autobiography "Hui-lan Koo" (co-authored by Mary Van Rensselaer Thayer).