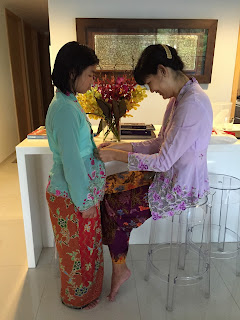 Right after my mother celebrated her 70th birthday, we made a trip to Penang.  Apart from trying out the "two sisters' char kway teow", my most vivid recollection of that trip was of my father, sister, aunt and I standing in the sweltering equatorial heat for three hours while my mother sat in a cramped seamstress shop with a tailor to discuss kebaya patterns.  That was the highlight of her trip and was her hidden agenda.  Sweating away, I was not very happy to say the least.  I grumbled and quarreled with my mother about her selfish ways.

Unknown to me until very recently, this tailor was a national artisan and a UNESCO cultural award winner.  My mother, sadly enough, died only a few months after the Penang trip and was dressed in one of those kebayas she had spent much time and money commissioning from this tailor.  "Aiyee!  Sayang!", my female relatives might exclaim if they knew these facts about the tailor.  Then again, in the end, my mother remained the sartorial queen as she arrived in heaven, dressed to the nines.

The sarong kebaya is the epitome of elegance for a Nonya, if worn with proper decorum.  I am not a fan of the new wave - when the kebaya is worn as a jacket over a flimsy camisole, or paired with jeans.  For that matter, the vibrant colors can be so jarring at times that I often wish the ladies who dress up would co-ordinate their colors so that they collectively look like a fragrant bouquet of flowers. 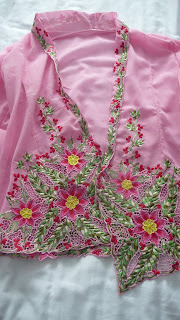 Not too long ago, there was a comprehensive exhibition at the Peranakan Museum about sarong kebayas.  An accompanying book by the curator, Peter Lee, was launched this year, a heavy tome that I had to leave behind in Singapore due to excess baggage.  I have yet to read it more carefully.  My take is that for the most part of its early history, the kebaya that a Nonya wore was far simpler.  Essentially a white top to pair with the busy pattern of Pekalongan batik.

It was probably with the advent of the Singer sewing machine that the stitched embroidery became more nuanced, with floral motifs, animals, birds, made of varying thread types and colors.  An expert tailor will take a novice through the lessons about the gauge of the thread thickness, how to manipulate the machine and edge those swirls and curls. 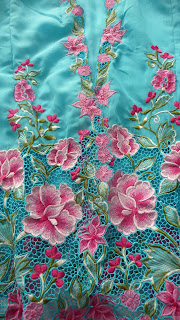 I labeled my mother "the original Madonna, she with her pointy bra".  Indeed, my mother had a Triumph corset bra which she would don before she put on her blouse and fastened with her heirloom kerosang brooch.  Preceding any wedding banquet, the bedroom would have full-blast airconditioning while my nimble fingers would be called upon to fix the hooks and eyes of the corset bra.  She would be perspiring and dabbing her make-up with tissue while I squeezed her into her lingerie.  I always marveled at how someone so proper like mother, had no inhibitions parading among hundreds of wedding guests in a see-through blouse and a lacy, pointy bra.

My mother and her obsession with kebayas seemed to be a concoction that caused occasional arguments between her and me.  She took great pains to customize a confectionery pink kebaya to wear to my Singapore wedding.  Her mutterings about the "peacock" befuddled me and I did not realize that she was referring to the pair of peacocks that would anchor the left and right corner edges of her blouse.  I never took a close look or appreciated the details of the kebaya on the night of my wedding banquet and I suspect, it was much to her utter disappointment.  Wistful about my actions after her death, I stashed that particular kebaya and brought it back with me to New York as a tangible remnant of her life.  The peacock's images grace the content pages of my cookbook, memorialized in honor of my mother's excitement for my wedding.  Ironically, for all the passion that she had for kebayas, she left behind fewer than ten blouses.  They were costly to begin with. 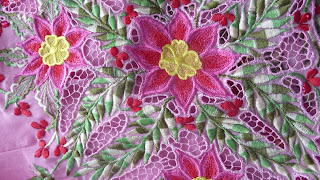 If only my mother was still alive to teach us the art of discerning a top notch kebaya from a common one.  We can only critique them according to how 'halus' (refined) the stitching is but then again, what makes for refinement exactly?  Besides, the material is meant to be voile, not cotton as is frequently presented in kebaya tops these days.  Apart from the Penang tailor, my mother was very fond of Benjamin Seck, whom she 'discovered' when he started out sewing in a small shop in Frankel Estate.  I would suggest St. Francis (Benjamin's label) although many customers shop at Rumah Bebe and Kim Choo as well.  One very recent addition is a small pop-up store in Suntec City (opposite Din Tai Fung) where I found some admirable floral patterns.  The lady gets her stock from Malacca. 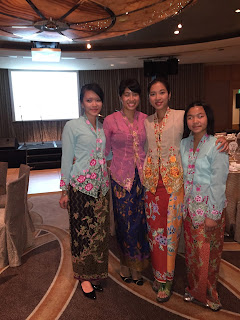 Recently, a few family members and I attended the Peranakan Ball.  I personally have never worn a sarong kebaya.  While I consider it the attire of my heritage and self-identity, I am possibly scarred by memories of my mother and her see-through blouse and pointy bra.  Instead, I wore my Shanghai Tang qipao for the umpteenth time, pretending to channel Maggie Cheung all the while acknowledging that I pass off more so as a mamasan for my nieces.  What encouraged me was the excitement among my nieces and daughter of putting together their individual sarong kebaya outfits.  And what encouraged them was an affirmation from President Tony Tan who exhorted them to keep the tradition alive by continuing to wear the attire in the future.

Three good books exist.  My favorite is Datin Endon's book if only to look at the beautiful patterns and quality of each kebaya.

Google+ sent me your link. Very interesting. Like the vivid colors and design

Yikes Carole. Don't even know how that works!