Graves of my Forefathers 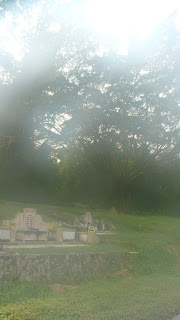 November 1 is All Saints' Day.  It is a popular time for the French to visit New York.  As a French friend once joked, "We'd rather shop on Fifth Avenue than sweep our ancestors' graves."  Halloween itself has its roots originating from these few days which in religious terms, are meant to be a time of remembrance of the dearly departed.  But in modern history, Halloween has become the ghoulish festival of dress-up.  Innocent toddler costumes, sexy Goth, carved-out pumpkins, bar-hopping, trick-or-treating, and midnight cemetery tours.

Back in Singapore, there continues to be a debate about the fate of the Bukit Brown Cemetery.  This is a cemetery of 100,000 graves, once considered the largest Chinese cemetery outside of Singapore.
Check out www.bukitbrown.com or www.bukitbrown.org.

This past Friday, the Peranakan Museum conducted a talk about the history of Bukit Brown.  For my family, the cemetery takes on a lot of significance.  Several members of my father's and mother's families, going five generations back, are buried there.  They are sprawled throughout the large piece of land.  For many prominent Peranakan families, for some reason which I have yet to understand (I missed the talk, for sure.), the cemetery became the place to rest in perpetual peace.  In fact, the Cheang Hong Lim family members were reburied there from their original private graveyard off Alexandra Road.

The government has earmarked part of Bukit Brown for a four-lane highway extension, with longer-term plans to turn it into prime real estate in a few decades. Loyal 'Brownies' - volunteer guides who are passionate about history and heritage, advocate turning this into a protected monument site. Read Tan Chuan-Jin's reflections, written when he was Minister of State for National Development.

Yet, descendants like me aren't more involved for various reasons. We are not proficient in the Chinese language or culture of our ancestors after years of creating our own Peranakan identity.  Many of us have converted to Christianity, hence we no longer observe the traditions of ancestral worship, let alone clean up the graves.  Ironically, we hold on to the superstitions of our ancestors and would rather not have anything to do with claiming exhumed bodies, leaving it to the migrant workers to do so.  So while the ministry involved tries to contact us, many decline responsibility.

Swept up in the controversy, I made a personal visit to a few of these graves back in March, 2013. Anything funereal is not my scene….and the warning of snakes in the lush undergrowth made me think twice.  (I have such a phobia of snakes that I decided not to attend a recent Mexican event commemorating the "Day of the Dead" because there was a snake charmer.)  That misty morning in March, Chew Keng Kiat, my tour guide, proudly declared that he had never encountered a snake during his jaunts.  My sisters did not want to tag along as expected.  Eew. Why visit a cemetery if you can avoid it?  "And you, Sharon, of all people?",  "Aren't you always scared of ghosts and spirits?"
Well, I guess my interest in family history overrode my lifelong fear of the dark arts.

I arranged for another friend to join us to make it a merrier, noisier crowd.  Always good to be loudmouths among the sleeping dead.  First stop was Gan Eng Seng who buried himself among his wife and several adopted sons, along with a special plot for his faithful servant.  It was quite a large compound and pretty well kept. Keng Kiat later explained that the students of the Gan Eng Seng School made a trip on every Founder's Day to pay homage.  They probably tidied the place up.

Cheang Hong Lim was tucked all the way back, to the point that his large grave was a literal stone's throw away from a luxurious bungalow off Andrew Road.  Imagine sunning yourself by the pool and knowing that Mr. Cheang is lurking at you from the backyard.  After all, he had several wives.

Right behind his tombstone was the grave of his nemesis - a man who had sued him many times over the opium business.  Funnily enough, the person I had invited to join us was the man's descendant.  So we laughed it off that the two old men ended up together.

Tombstones tell a lot.  Recently, my family visited Arlington Cemetery in DC and I was anticipating a boring tour.  Lo and behold, my children gleaned many facts from those tombstones - the age of the soldier when he died, his religion, the names of his wife or children buried with him, perhaps an infant baby.  Similarly, the Bukit Brown tombstones detailed the names of sons, the number of wives, the date of birth and death according to the year of the Chinese emperor's reign, his official ranking and titles (if he had any).  The origin of his township in China.

I was fascinated.  If I had scored a double A for the Chinese language back in school, I would have been recording and translating my family genealogy right there on the spot.  Besides, the cemetery planning was probably filled with references to geomancy, symbolism, and 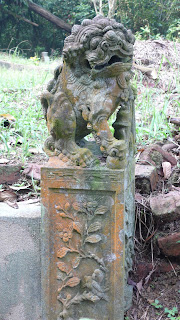 architectural details unknown to the laymen like me but meaningful for learning the Chinese culture.

This all begs the question of the future of such a historically rich gravesite - that memorializes the immigrant story of early Singaporeans.  I hope that one day, UNESCO will recognize it as a World Heritage Site.  If one has visited any of these sites elsewhere in the world, you know that the Botanic Gardens has little to compel when compared with Bukit Brown. 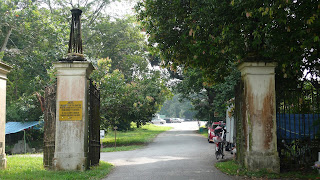